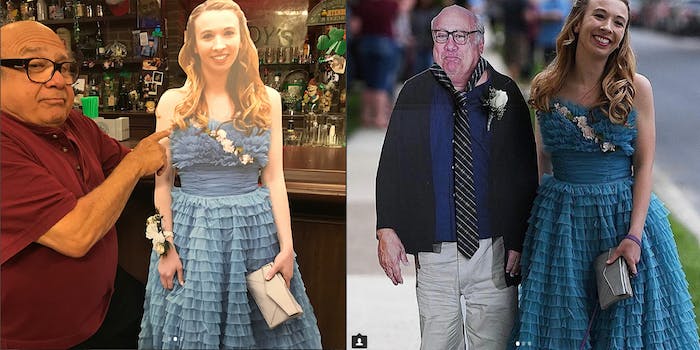 He'll do you one better.

Danny DeVito had the perfect response for a certain teen who took a cardboard cutout of him as her date to prom in May.

The 73-year-old It’s Always Sunny in Philadelphia star reciprocated the kind gesture on Monday and had a cardboard version of the teen, whose name is Allison Closs, brought to the set of the hit TV show.

Rob McElhenny, who plays Mac on the show, shared a photo of DeVito with the cardboard cutout at Paddy’s, the pub that is the home base for all the stars in the series.

Thank you SO, SO MUCH @RMcElhenney and @DannyDeVito for fulfilling my dream of visiting Paddy’s Pub from @alwayssunny !! 🤩 pic.twitter.com/EJiLZ3V4Qy

Back when Closs originally went viral with her cardboard cutout of DeVito, she said on her YouTube channel that she admires the actor, who she said has always been there for her through his various movies.

“I couldn’t find myself a date in real life or with an actual human, so I bought one on Amazon,” she said. “I have always loved Danny. I loved him on It’s Always Sunny in Philadelphia, I loved him in Hercules and Matilda. I just love him in every form he takes. Danny was there for me when I really needed him. He treats me the way a woman should be treated.”