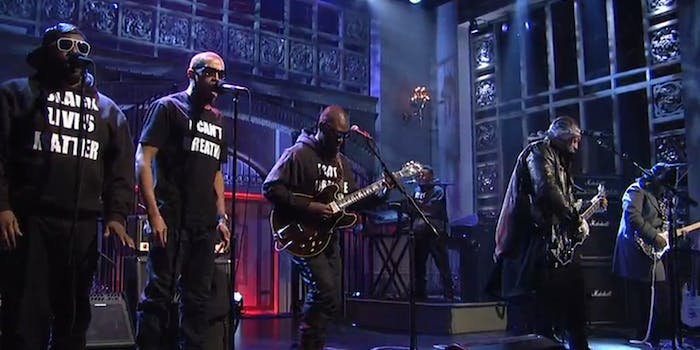 The second song is where he found his groove.

D’Angelo traveled his enigmatic brand of politically charged and densely beautiful neo-soul to Saturday Night Live last night. Performing alongside his band, the Vanguard, the man who wrote 2014’s most acclaimed record—after a 14-year hiatus—was staunchly on message.

Paying bills, the first performance was a clunky version of radio single “Really Love,” which is gorgeous but a way less interesting version of 1998’s “Break Ups 2 Make Ups.” Wearing a ridiculous fedora and boldly functional cape, D’Angelo’s knack for turning out romantic leading man charisma was shaded awkwardly. He appeared out of his element.

But the night’s moment of clarity belonged to performance No. 2, “The Charade,” a lightly recorded gem that sounds like Dirty Mind-era Prince, with a #BlackLivesMatter edge. There were chalk outline theatrics and dramatic team T-shirts, but this wasn’t overly melodramatic and laborious musical theater. D’Angelo let his team riff, and the thing was righteously militant. This one started after midnight on the East Coast, making it a fitting start to Black History Month.