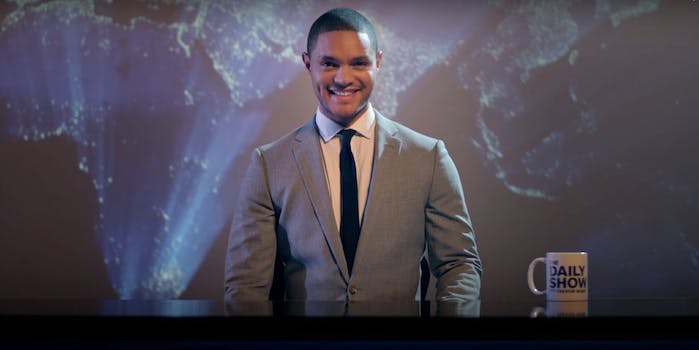 The network has hired Baratunde Thurston, formerly the director of digital for 'The Onion.'

With Jon Stewart at the helm of The Daily Show, finding ways to make an impact on social media were plentiful, particularly since the show oftentimes filled act 1 with outrage and then produced viral-worthy field pieces for act 2.

It was nearly perfect for people looking to waste part of their mornings while perusing the Internet. But Stewart never joined Facebook or Twitter, and he once told New York magazine that scrolling through the Internet was like “walking through Coney Island” and hearing “carnival barkers.”

Now, armed with a new host in 31-year-old Trevor Noah and a new direction, The Daily Show will begin producing original content across multiple platforms for the Web and social media.

Comedy Central said Thursday that the creation of production of the new multi-platform content will be led by Baratunde Thurston, a comedian, writer, and author who the network also calls a “digital entrepreneur.”

“Baratunde brings a very unique set of skills to The Daily Show. We’ve been admirers of his comedic work on all platforms for a long time,” Michele Ganeless, the president of Comedy Central, said in a statement. “We’re thrilled he is joining the team and can’t wait to see what he and the team create for the show under Trevor Noah.”

Thurston previously served as the director of digital for the Onion, co-founded the Cultivated Wit website, and wrote the New York Times-bestselling How To Be Black.

“This must be what it’s like to have Nick Fury call and welcome you to The Avengers. I’m honored and floored and so many other verbs,” Thurston said in a statement. “Also, I really love that quote by Michele Ganeless because she makes me sound like Liam Neeson. I will definitely be sharing that on multiple digital and social outlets.”

Or to put it another way.

The move makes sense for the newest era of late-night talk show hosts. Though Jay Leno, Dave Letterman, and Stewart seemed to avoid the idea of making content just so it could go viral, the newest crop of hosts like Jimmy Kimmel, Seth Meyers, and especially Jimmy Fallon create much of the content on their late-night shows so that it will also play well the next morning on the Web, creating plenty of buzz (and mouse clicks).

“There’s a lot of pent-up demand here to do some really fascinating things, and as we shift that focal point of the lens, beyond cable video news into other realms, the show itself will change,” Thurston told the New York Times. “…  What can we say that is the Daily Show take on a space like Instagram? These places are real communities. They’re not just technical platforms. They’re like Soylent Green — they’re people.”