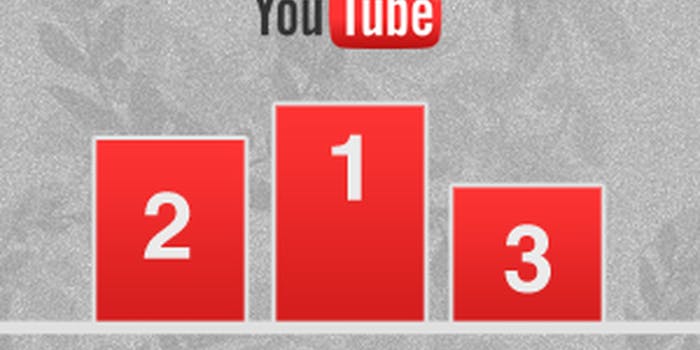 For these video stars, YouTube isn't TV reinvented: It's a whole new medium, with new rules for fame.

The Daily Dot is the hometown newspaper for the Web’s varied communities. Today, we take a look at the people behind the videos of YouTube.

YouTube is flat-out one of the most popular sites on the Web. By May 2011, the Google-owned site crossed the threshold of 3 billion views a day. 48 hours of fresh content are uploaded every minute. There are hundreds of millions of users around the world.

It’s literally impossible to watch all of YouTube. Contemplating it as a whole is hard to get your head around. Yet within its vastness, a digital community has managed to form.

These YouTubers identify themselves as creators, as vloggers, as entertainers, as entrepreneurs, as adoring fans, as haters. It’s easy to sit back and watch clips. But if you lean forward, you can see the connections.

These YouTubers have to be larger than life to rise to the top. They have to be charming, entertaining, and engaging. And they’ve already figured out this personal branding nonsense social-media gurus have been yammering on about for years. Their millions of subscribers, and millions of video views, already prove that.

Here’s our list of 2011’s top YouTubers—the ones who aren’t just making videos, but making waves, too.

The Green brothers, older than the average YouTube star, are hands-down one of the most influential pairs on the site. They organize and run VidCon, the YouTube video conference, and also organize Project for Awesome, an annual video charity drive in December. Through those projects, they’ve formed valuable bonds with more popular YouTube creators.

As the vlogbrothers, as their channel is named, they’ve amassed a solid community. Their fans even have a name for themselves: “nerdfighters.” The Greens and their nerdfighters have coined a few terms that propagate the site, the most popular being “DFTBA,” which is short for “Don’t Forget To Be Awesome.” One touching example of awesomeness: Ester Day, which occurs on August 2, honors a “nerdfighter” who died of cancer. The Greens wear her foundation bracelet in their videos.

The duo’s video work revolves around them casually talking into the camera, either telling a story, sharing an opinion or a pseudo-lecture, or answering questions.  The Greens began their YouTube career in 2007 with the Brotherhood 2.0 project, an experiment where they communicated with each other through public video only.

Even though they’re not in the top 100 most-subscribed channels, Google chose the Vlogbrothers to be part of YouTube’s multimillion-dollar effort to bring more professional content to the site. The Vlogbrothers are signed up to do two shows: CrashCourse, weekly lessons in humanities and science, and SciShow, which is described as “timely news and evergreen information on the most awesome science ever.” Watch out, TV.

Comedian Ray William Johnson is the most subscribed-to YouTuber on the site, making him simultaneously the most hated and the most loved. (The numbers listed above are for his main channel, of which he has three.) By some estimates, Johnson will earn a cool million dollars from his YouTube work.

It’s a sign of his status that people regularly upload videos hating on RWJ, as he’s known—and that his fans seek out these videos and engage in comment wars in his defense.

Hate him or love him, Johnson is a critical factor in breaking new YouTube acts. He has a regular show, =3, in which he features videos he finds, guaranteeing their creators a big boost in popularity.

Comedian Jenna Mourey, known as Jenna Marbles on YouTube, is the most subscribed-to female YouTuber. (It’s a sign of YouTube’s male domination that she’s only at No. 18.)

Marbles’s insanely fast ascent to YouTube fame began in 2010, with a video titled “How to trick people into thinking you are good looking” which was viewed 5.3 million times within the first week.  Marbles has since managed to beat out other long-established YouTube women by balancing her sex appeal with witty skits, tidbits, stories, and rants.

Lately, she’s become a media darling. Marbles attended the Marine Corps Ball after being invited on YouTube (the same series of events Mila Kunis and Justin Timberlake attended), and was on Good Morning America promoting some poppycockish anti-dance-rape agenda. The anchors seemed to take her seriously. But could her mainstream-media agenda just be part of her provocative schtick?

DeFranco, known on YouTube as sxephil, also enjoys a love-hate relationship with the YouTube community. (Hater videos addressed to Ray William Johnson sometimes also mention DeFranco.) Over the years, DeFranco has had multiple channels and shows.

For his discussions of news and popular culture, DeFranco has been called the “Jon Stewart of YouTube”. He recently went on a tour through Europe where hundreds of his fans met him in person. DeFranco’s fan base, which he calls “The Philip DeFranco Nation,” or just “The Nation,” snaps up his cleverly designed merchandise.

Other YouTubers have appeared in EMT videos, either in cameos or collaborations,  cementing its popularity within the community. YouTubers that have appeared in episodes include Jenna Marbles, Smosh, Harto of the “My Drunk Kitchen” series, gamer and commentator whiteboy7thst, and FPS Russia, a fake Russian doing a YouTube show about guns. Skate-boarding celebrity Tony Hawk also made an appearance in one episode. EMT also did collaboration videos with Freddie Wong and DeStorm.

Cast of the show were guests on The Tonight Show with Jay Leno, starred in at least one commercial, and appeared at Comic Con 2011. An impressive feat for a YouTube show hardly a year old.

Epic Meal Time recently announced it would sell bacon-flavored products. We still haven’t heard an explanation of how EMT’s baconlube can possibly be vegan and still made of bacon, though.

A more lucrative venue may be cable TV. While there were rumors EMT would start running on TV back in February, those didn’t pan out. More recently, though, it looked like the show really would make the jump to NBC Universal’s G4 channel.

DeStorm—pronounced “day storm”—has been plugging away on his music career on YouTube since 2006. Unsigned by a music label, he nevertheless won the New Media prize at this year’s American Music Awards. He’s ghostwritten for various labels, but now? He’d rather YouTube, thank you.

And get this: Power is also an Olympic-trained triple-jumper and offers fitness tips on his second channel. He’s also a champion networker, having appeared in collaboration videos with the likes of Freddie Wong (No. 7 on the Daily Dot’s list) and Mystery Guitar Man. You’d be hard pressed to find a negative word about Power among his fellow creators. He’s the most prominent African-American YouTuber, ranking 44th in subscription counts.

Freddie Wong’s geek-chic, guntastic YouTube career took off in 2010 after four years of slogging away making random, video-game-themed videos. 2011 has been even sweeter to Wong. When the Daily Dot wrote about him this summer, he was the 10th most-subscribed YouTuber. He’s now rocketed to sixth place.

In July, Wong and his partner, Brandon Laatsch, teamed up with Hollywood director Jon Favreau to film a promo for Cowboys and Aliens. Lesser known celebrities occasionally appear in Wong’s shorts, which is how Favreau got introduced to Wong. In September of this year, Wong and Laatsch appeared on Jimmy Kimmel Live, a mainstream breakthrough which cemented their mainstream fame.

Yet Wong won’t ever leave YouTube, he told the Daily Dot in an earlier interview, because he firmly believes in “straight-up digital delivery” and thinks poorly of Hollywood and its middlemen.

December is proving to be the capper to a great year. He appeared on NBC’s “Chuck” last week, and over the weekend his commercial for the popular video game Battlefield 3 went live.

Phan, known on YouTube as ricebunny, lost her spot as the most-subscribed woman on YouTube to Jenna Marbles this year—but she’s still a power player.

Beauty tutorials are one of YouTube’s best-kept secrets. But Phan is arguably the most successful beauty stylist on YouTube, having been hired by Lancôme last year. This year, she came out with her own line of products. A style-video pioneer, Phan has inspired hundreds of other lady YouTubers with their own style and beauty channels. And now Google is bankrolling Phan’s For All Women Network (FAWN) in its push to have longer-form content with higher production values on YouTube.

The Fine Brothers, aka Benny and Rafi Fine, have been on YouTube since 2007. The pair’s main claim to fame is their “Kids React” series. While their numbers aren’t as high as some on our top 10, they are a YouTube favorite because they cater to the community: Their schtick is YouTube videos of kids reacting to YouTube videos! (One of their latest: “Kids react to DeStorm.”)

The Fine Brothers can be credited with finding Lia Marie Johnson, who originally started in their “Kids React” series. She’s now got a budding TV career—but is staying true to YouTube in the Fines’ spinoff series, “Teens React.”

If you’ve ever clicked on a YouTube embed and gotten the stark message “This video has been removed,” you know what a bummer copyright fights are. Sure, copyright infringement is a problem for YouTube and the big media companies it increasingly wants to partner with. That means the YouTube community is often left out the conversation when videos—along with comments, likes, responses, and all the data generated by people’s interactions—get yanked.

Then there are the YouTube community’s self-inflicted wounds. See a video you don’t like? Want to lash out at a fellow YouTuber? Lead a gang of “flaggers” and report the video as violating YouTube’s Community Guidelines, and off it goes.

For better or for worse, though, these content removers shape what you see—or don’t see—on the site as much as the creators do.