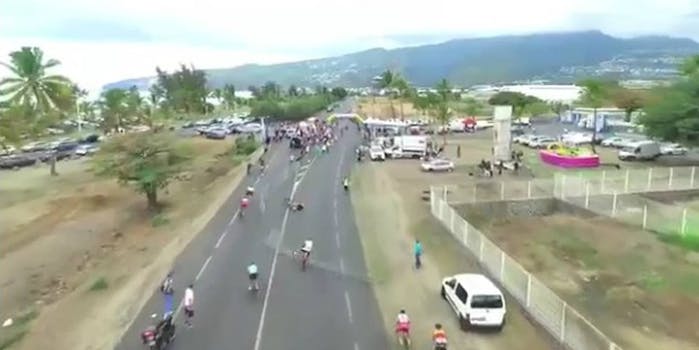 A cyclist’s father angry with the organizers of a major cycling race allegedly took matters in his own hands on Sunday. He was reportedly unhappy that Tour Cycliste Antenne Reunion organizers failed to stop the race when his son crashed on the course. The man’s retaliatory actions led to a disturbing crash.

Watch this spectator—identified by local news site linfo.re (via Cycling News) as Jean-Bernard Boyer, whose son Jonathan Boyer had been involved in a crash earlier in the race—appear to pull a section of a metal barricade onto the course, causing six riders to crash.

According to linfo.re, Jean-Bernard Boyer was upset that the race wasn’t stopped after Jonathan Boyer and Enzo Bernard both crashed into the barrier a few laps earlier. Though Bernard was disqualified from the race for dangerous sprinting, he later said on Twitter that the both riders’ handlebars had become intertwined while they were sprinting.

According to the Comeback, that tweet translates to “Hectic day on the 1st stage of the tour of the meeting… And a fool who puts the lives of athletes in danger.”

Jean-Bernard Boyer was reportedly questioned by police and fined €300 by the race organizers. An investigation into the incident is ongoing.

The riders who managed to avoid the barricade—which separated the spectators from the race course—ended up riding into the area where the spectators stood, creating another dangerous scenario for many more people.

Organizers then stopped the event—which was on the first day of its nine-stage race on the French island of Réunion, off the coast of Madagascar.

Rider Brad Potgieter was one of the cyclists who couldn’t avoid the barrier across the road, and he reportedly broke his collarbone as a result of the crash.

I'm very disappointed with terrible accident in the last 150m. This was a dangerous action taken by the spectator https://t.co/GlY0H5AKiN