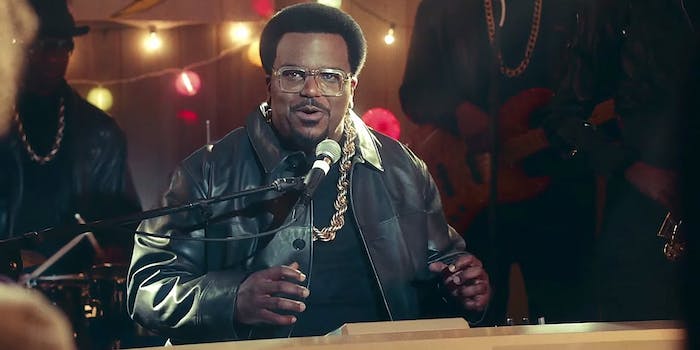 Craig Robinson is getting the band back together.

The Super Bowl halftime roster is getting crowded, as the number of competitors to Katy Perry’s mid-game pop explosion continues to mount.

In addition to Harley Morenstein’s YouTube halftime show of epic proportions, there’s Animal Planet’s Puppy Bowl and National Geographic’s Fish Bowl (this year featuring clown fish) that will serve as counterprogramming to the overhyped dancing and singing midway through Super Bowl XLIX. Add to that growing list actor and comedian Craig Robinson who—with the assistance (and dollars) of Comedy Central and Pepsi—will try to fulfill his dream of performing at the lengthy break between halves.

The details of this promotion are slightly strange, so follow along. Robinson will provide the actual halftime entertainment for Key and Peele’s Super Bowl special on Comedy Central, but that show airs on Jan. 30, two days before the big game. Prior to his performance on the pre-pregame special, Robinson will be featured in a three-part webseries special that centers around the former star of The Office, Pineapple Express, and Hot Tub Time Machine getting his band, Craig Robinson & The Nasty Delicious, back together in time for halftime of the big game.

The first of the series, available on the Comedy Central and Pepsi YouTube sites, sets the wheels in motion with Robinson telling his friend (who later becomes his fairy godmother) that it’s always been his dream to perform at the yearly NFL championship game. Segments two and three will air online next week as well as through the network and soft drink’s social channels.

Robinson’s musical prowess is no act. During his days as a standup comedian, part of his shtick was built around him playing and singing (often way-off-color) ditties that would lead to great laughter. He also has showed off his keyboard skills on a number of episodes of The Office as well as with Jimmy Fallon on The Tonight Show.