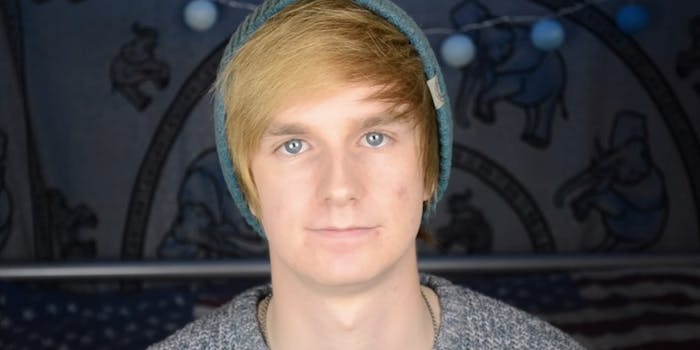 Police halt rape investigation into claims made against YouTube star

In November Wolverson published a video, which is now private, alleging Dillon proceeded to have sex with him after Wolverson refused during an overnight stay. Several others followed with videos, leaving comments describing their own alleged sexual assaults at the hands of Dillon. YouTubers Mike Jerry and Jamie Pine both shared stories on YouTube about Dillon—both of which remain live.

Dillon maintained his innocence throughout the process, which included posting a video defending himself against the accusations. Dillon was arrested 10 days after Wolverson’s public accusation, and his computer and mobile phones were seized. The police declined to continue with the investigation on April 2, Dillon said in a statement.

“After the worst 6 months of my life, I am finally pleased to hear that the truth has prevailed,” Dillon wrote. “I suffered massive losses with my friends, my studies and my work because of these false claims. I cannot begin to explain the trauma I experienced over the past six months, however I am happy that I can now begin to rebuild my life and career.”

Even with this particular charges cleared, the problem of sexual abuse and coercion in the YouTube community looms large. In 2014 a variety of popular male YouTubers were accused of misconduct, though many of these claims did not progress to any level of law enforcement. From Sam Pepper’s inappropriate forceable touching of women while filming his videos to accusations of inappropriate sexual conduct with minors against Alex Day and Danny Hooper, many cases remain open-ended while the same creators continue to flourish on the platform.

“I would also like to add my voice to the calls for anonymity for those accused of rape,” Dillon continued in his statement. “We need to prevent rape accusations becoming an easy way of revenge and we must maintain the respect and support for those victims who truly experience the horrendous crime of rape.”