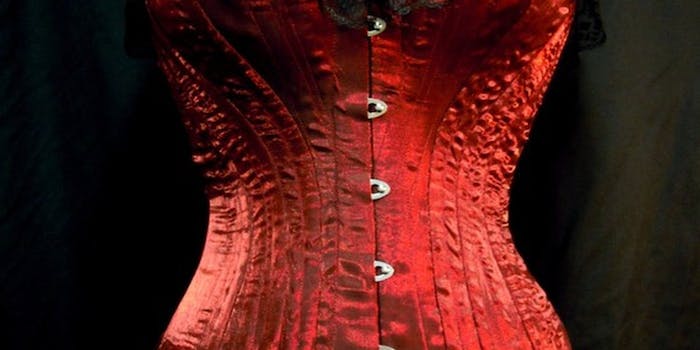 Courtney Love allegedly has an Etsy profile. Some sellers we talked to think she's the real deal.

Courtney Love—if it really is Courtney Love, the troubled rock-and-roller widow of Nirvana’s Kurt Cobain—loves corsets, beads, crystals, teapots, huge rings, paintings, naughty lingerie, a “grunge” dress pattern, crowns, and pictures of herself and a picture of the bridge under which her late husband once lived.

Those are just a few items that an Etsy user named cherryforeverreturns, who identifies herself as “courtney love cobain” from New York, has chosen as favorites.

Cherry Forever is the name of a California corporation registered in Courtney Love’s name.

The Daily reported that the Etsy profile really does belong to Courtney Love. And the story repeated the typo-laden note on the front page of her profile, mentioning something about money and payments. (It doesn’t sound promising for sellers who want more than a link to their pages, but who are we to judge?)

This is the complete (and unedited) About section of her profile: “just like to come here, my checks are on a wierd sahcedule so bear with, per paypal plus my paypal account has had wierd stuff happen eg salaries and theft, so im very persnickity about it, but if i really like it youll get paid , my cpa hates the word’etsy: ‘but theres vendors on here i adore nd i al;ways discover new inspiring stuff”

The profile does looks like it could be real, given Love’s outsized reputation. The writing is consistent with her devil-may-care orthography on sites like Twitter and Myspace over the years. But as anyone who has been online longer than two days understands, it’s good to be skeptical about such things.

We reached out to the owner of the profile and will let you know if we hear back from her.

In the meantime, we also contacted a few sellers marked as favorites by cherryforeverreturns.

“I am pretty excited that she hearted my shop and excited to see what she buys,” wrote Jim Hansen in an email to the Daily Dot. Hansen, who runs the shop kuberacove, said he thought there was a pretty good chance that the person who hearted him really was the famed Courtney Love.

“I have a feeling it might be. I Googled her and ‘Etsy’ and there are a couple of articles from other Etsy people that have said she bought from them including pictures and stuff,” he said. “Wonder when she will place her order.”

Added Etsy artist panthia: “I had no idea Courtney Love favorited my tiny little shop. If that is true I am honored as I love her aesthetic.” Her shop features vintage jewelry (the kind you could picture Love wearing).

Others said they were similarly flattered.

Who wouldn’t be? Love is not exactly known for her apple-pie image. But her aesthetic — think lace, eyeliner and very thin, tattooed arms — appeals to a subset of diverse artists who cluster on Etsy.

We dug through her favorites to come up with a few that we thought interesting. Here’s the alleged look of Love: