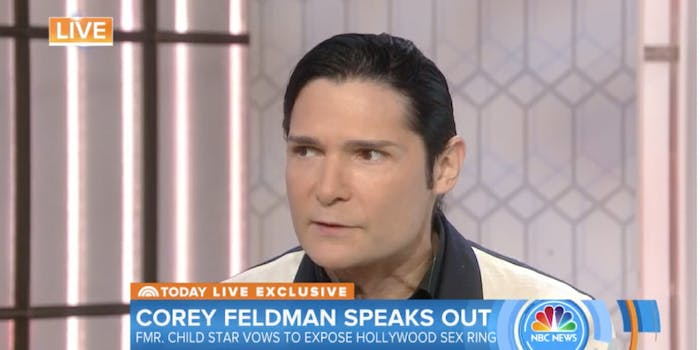 He wants to make a movie, and says he needs security.

In an interview with NBC’s Today, Corey Feldman explained his decision to stall releasing names of people in the Hollywood industry he alleges molested him and his friends when they were child actors.

The interviews follow Feldman’s announcement of his $10 million crowdfunding campaign for a feature film about his life that he said will help viewers uncover the truth about pedophiles in Hollywood. The campaign has raised a little over $160,000 as of press time.

“Corey believes this revolutionary approach to self financing and self distribution can revolutionize the film industry and take away the power from those who now hold the keys to the world of Entertainment, which allows the power monsters to continue doing the things they have for so long,” the IndieGoGo page said. “This can truly be a way to regain control over who has access to children in the industry, while weeding out the criminals who have already caused the damage.”

IM VERY NERVOUS AS THIS IS SO MUCH BIGGER THAN ME! PLEASE PRAY GOD PROTECTS ME FROM EVIL, & HELPS ME PROTECT THE CHILDREN OF THE FUTURE! 🙏🏼

In his interview with Megyn Kelly and Matt Lauer, Feldman said he cannot release the names of his abusers publicly yet because he is concerned about his own safety. He said he won’t release the names until he has better security.

That’s where the crowdfunding campaign comes into play, Feldman said, because he plans to use the funds raised to not only pay for the movie’s production but to also hire lawyers and security.

“I need a team of lawyers and I need a team of security to be around me at all time to keep me safe so I can get this message done,” Feldman told Kelly and Maur. “I vow that I will release every single name that I have knowledge of, period. And nobody’s going to stop this.”

Some Twitter users remain skeptical of Feldman’s refusal to name pedophiles who could potentially still be working with child actors in Hollywood today, questioning his motive for trying to raise $10 million. Judy Haim—mother of Corey Haim, one of the actors Feldman claims was molested—told the Hollywood Reporter that she thinks Feldman is a “scam artist.”

It appears, however, that many fans remain loyal to Feldman. Over 3,400,000 people have contributed to Feldman’s campaign so far.