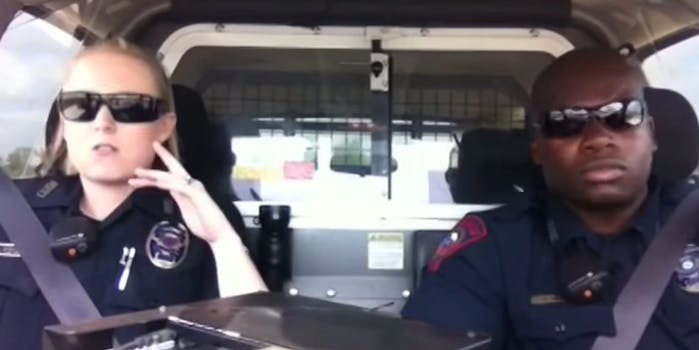 Nobody loves Katy Perry as much as these lip-synching cops

The police in Rosenberg, Texas, are a special breed.

With the endless stream of articles about police brutality, corruption, and outright incompetence, it can be hard to remember that most cops are just ordinary people tasked with an extraordinary job—and fully entitled to blow off some steam on occasion.

How do officers of the law in Rosenberg, Texas, kill time in the patrol car between calls? By lip-synching to their favorite trashy pop songs, obviously. Here we’re treated to a casually masterful rendition of Katy Perry’s “Dark Horse” that proves police “really are no different than anyone else.” (Except for how hard they rock those wraparound shades, maybe.)

Soltura also made headlines in January when a dash cam video of him stopping to throw a football with a lonely local youth made the rounds online. Great cop or greatest cop?

Still wouldn’t want to be arrested by this crew, but we get the feeling they’d be nice about it.