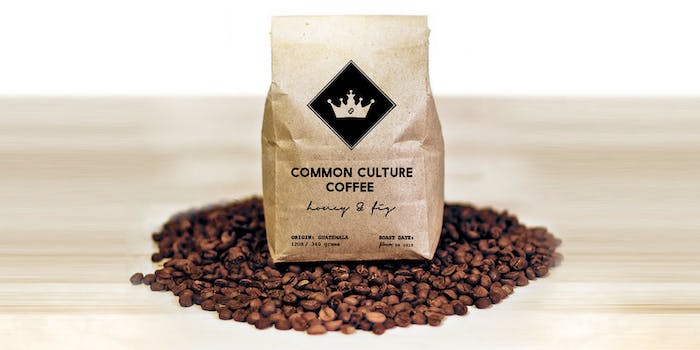 Would you rather have Starbucks, or coffee from your favorite YouTube star?

If you want to get your hands on Connor Franta‘s coffee, you better move fast.

Franta, a popular vlogger who most recently made headlines with an emotional coming out video on his YouTube channel, has launched his own specialty small batch coffee line, Common Culture Coffee, with a limited release of his first flavor online for only 48 hours. With 4.1 million subscribers vying for a cup, it’ll be sure to go fast.

Franta was a member of the defunct YouTube supergroup Our2ndLife until last summer. Members of the group have all branched out to different ambitions, from music to new collaborative video efforts. Franta made inroads with branding his own items before, cracking the Billboard Top 200 with a compilation album of his favorite upcoming tunes. At the time he alluded to other consumer-facing ideas for his brand when talking to The Daily Dot in November.

The debut selection from Common Culture Coffee is a “single origin Guatemala coffee, a light to medium roast with notes of fig and honey and a balanced taste for any palate,” according to a press release. The line will be distributed through LA Coffee Club and new offerings will be released seasonally. Franta will donate $1 per bag to The Thirst Project, an organization that raises money for freshwater wells in developing nations. Franta raised $230,000 last year to build a well in Swaziland.

“Coffee has always been a significant part of my life,” said Franta in a press release. “For me, it’s a chance to start my day and gather my thoughts – it’s fuel for my creative process. I wanted to share my love of coffee with a wider audience and also continue to raise money for The Thirst Project through Common Culture Coffee.”

If you’re itching for a taste and can’t wait for shipment, limited samples will be available at the Playlist Live YouTube convention in Orlando this weekend.