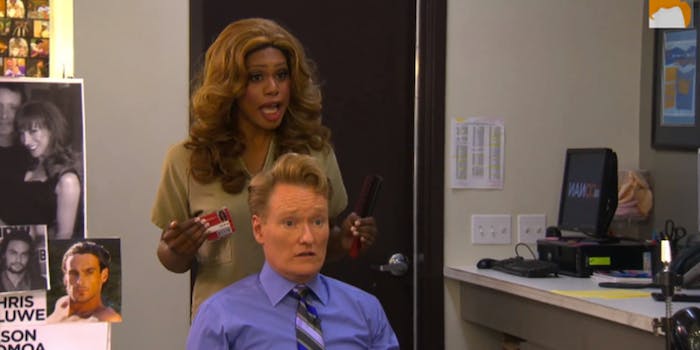 There should be an OITNB variety show.

The Orange Is the New Black victory lap continues: Last night, members of the cast appeared on Conan for an OITNB-themed episode. The cold open even offered an alternate take on the show’s opening credits:

Uzo Aduba, Lea DeLaria, Natasha Lyonne, Taylor Schilling, Laverne Cox, Kate Mulgrew, and, unfortunately, Jason Biggs all appeared on the couch, and each actor got their own segment.

Aduba talked about telling her Nigerian parents she was going to be playing “Crazy Eyes,” and how her mother’s favorite scene is when Piper beats up Pennsytucky. Also, she taught Conan how to make “crazy eyes”:

Cox explained she has a twin brother, who played her in the show’s pre-transition episodes:

Jason Biggs talked about live-tweeting his son’s birth, which is hilarious considering his recent Twitter meltdowns. I think most people just wanted to hear that Biggs would be off the show next season, because watching him play Larry is like watching a bowl of cold oatmeal. So watch Kate Mulgrew air her Irish jig grievances against Conan instead:

This episode makes me think there should be an OITNB variety show, like an update of The Carol Burnett Show.