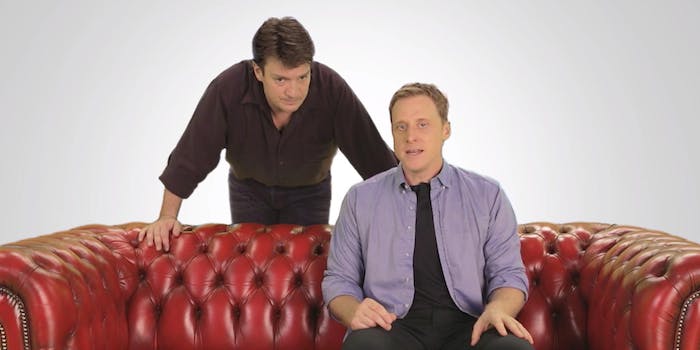 After a very successful Indiegogo campaign, 'Con Man' is here.

At Comic-Con International: San Diego on Thursday, Vimeo announced that it will premiere the series Con Man on Vimeo On Demand on Sept. 30. Three new episodes will debut every Wednesday for four weeks. It will be available to rent for $14.99.

The series was fully funded via an Indiegogo crowdfunding campaign that raised $3,156,179 from some 46,000 contributors. It marks the third all-time highest funded film or TV campaign on any crowdfunding platform.

Con Man focuses on Wray Nerely (Alan Tudyk), the co-star of Spectrum, a sci-fi series canceled before its time that went on to become a cult classic. Wray’s good friend Jack Moore (Nathan Fillion), who starred as the series captain, went on to become a major celebrity, while Wray (Tudyk) has subsisted on paid appearances at sci-fi conventions and comic book stores.

The fictional scenario bears more than a passing resemblance to reality: Fillion and Tudyk played the captain and the spaceship pilot, respectively, on the 2003 sci-fi series Firefly. It was canceled after only 13 episodes, and Tudyk soon found himself appearing at cons.

The Firefly experience is one of the reasons Tudyk and Fillion decided to crowdfund instead of looking for traditional network backing.

“If you partner with somebody who doesn’t like… the world that [the series is] set in, they cancel it too soon,” explained Tudyk in his video pitch on the Con Man Indiegogo page.