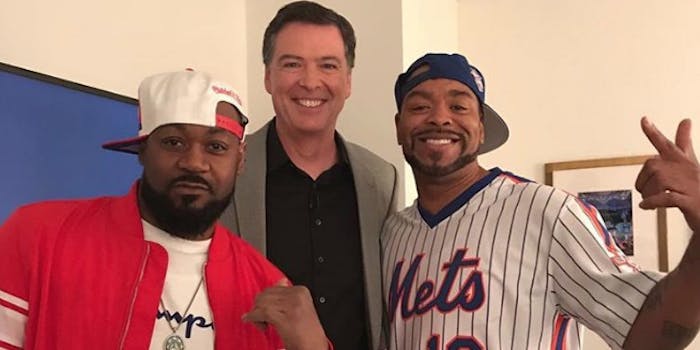 'Once Upon a Time in Shaolin' was seized by the feds.

After appearing on the Late Show with Stephen Colbert together Tuesday night, it looks like the Wu-Tang Clan has enlisted James Comey to help the group recover its controversial album Once Upon a Time in Shaolin.

Wu icons Ghostface Killah and Method Man actually did some comedy about their exclusive album’s precarious legal situation early in the show, confronting a Keebler cookie representation of Jeff Sessions and then eating him on-air. But it looks like they also got a hold of Comey’s ear backstage in the dressing rooms.

In an Instagram post Tuesday evening, Ghostface Killah shared a pic of the three smiling together, and wrote that he and Method Man are “workin on getting that album back from the feds.”

Once Upon a Time in Shaolin was famously purchased by pharma-bro Martin Shkreli for $2 million back in 2014, but he was forced to forfeit the asset to the federal government last month after being sentenced to seven years in prison for securities fraud. In other words: Jeff Sessions has custody the rarest Wu-Tang record of all time.

Method Man and Ghostface are apparently ready to get the album back now, and honestly, they might have tracked down the one lawyer big enough to take on the job.