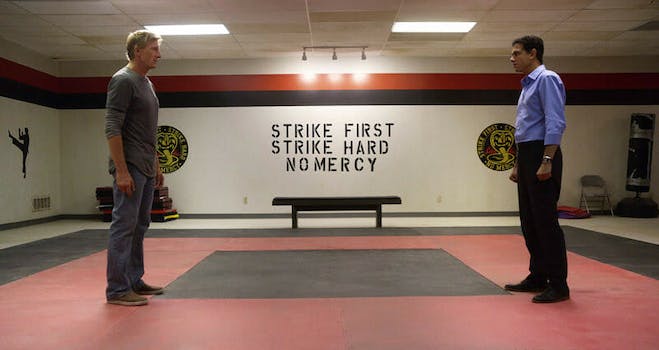 If you love the Karate Kid franchise, you’ll find something familiar in YouTube Red’s Cobra Kai.

The 10-episode series revives original character Daniel LaRusso (Ralph Macchio) and his arch nemesis Johnny Lawrence (William Zabka), and for fans of the original trilogy, it has everything: continuity, Easter eggs, original cast, and a script that sticks to the look and feel of the original movies.

The timing of Cobra Kai had to be right, Macchio tells the Daily Dot. He even appeared in 2010 Funny or Die parody “Wax On, Fuck Off,” which he jokes was the proudest four minutes of his life.

“Because, look, I said no for 30 years,” he says. “Every time someone said, ‘Hey, how about you have a kid that’s in trouble and you become the Mr. Miyagi.’ Everyone has their opinion. ‘Wait this is it! I got it!’ And I’ve always said no. It was the same reason I didn’t get in on the 2010 remake. I wanted to let it be its own entity.”

The Karate Kid has endured as a piece of pop culture through YouTube clips, comedic bits, and obsessive fan theories about the film’s real villain. So it’s only fitting that the new series—executive-produced by Jon Hurwitz, Josh Heald, and Hayden Schlossberg—is making its debut on YouTube Red. Macchio knew streaming was the way to go and explains YouTube allowed them to take more time and get more character development and depth than a regular movie release would have allowed.

That character development is important because Cobra Kai focuses on the relationship between LaRusso and his teenage daughter (Mary Mouser) as well as him and Zabka. LaRusso now owns his own car dealership and lives in a nice house in Southern California; Johnny Lawrence is estranged from his teenage son and just got fired. Still drives that awesome convertible, though!

The first episode introduces us to where Lawrence has been for 30 years and how LaRusso’s controversial crane kick win has haunted him every day since. It starts off with footage from the final scene of the original movie, but instead of ending with the celebration of LaRusso’s win, the camera pans down to the mat where we see Lawrence laid out, clenching his fist in defeat. This not-so-tragic loss seems to be driving the now-middle-aged Lawrence through the first and second episode. How could he still have this grudge against Daniel, especially after Mr. Miyagi (Pat Morita) saved him from being choked out in the parking lot by his army veteran sensei in Karate Kid 3?

He explains that in The Karate Kid, he was “waking up the whole second half of the tournament when he was watching Kreese direct the kids to hurt or injure somebody. At this point of the movie [Johnny] begins questioning his illusion of what’s right and wrong. And that crane kick actually sets him free.”

That offers a little insight into his Cobra Kai character, who tries to get his life back on track by recruiting a new karate student, Miguel (Xolo Maridueña), and revamping the Cobra Kai dojo. Zabka says that after losing the 1984 All Valley Karate Championship, Johnny “lost his whole mind frame… He lost himself in that moment.”

Soul-searching usually isn’t a trait found in classic movie bad guys, but it’s official: Johnny Lawrence isn’t the bad guy in the new Cobra Kai series, something predicted by Barney on How I Met Your Mother. Off-screen, Macchio and Zabka remained good friends throughout the years, but fans of the original movies will notice one important person is missing. In 2005, Pat Morita died of kidney failure at his home in Las Vegas. For Macchio, his death dealt a huge blow.

“Listen, working with Pat was like… an easeful magic, it never required labor-intensive anything,” he says. “It felt really natural. And I think for whatever the reason it was that we were put together in two roles that defined our careers, he very much knew that he was playing a character that was important to Japanese-American culture as well as he knew all the comedic beats and he knew all the dramatic moments. There’s a soulful magic in that Miyagi-Daniel father-son relationship that was beautiful.”

Ironically, it was Zabka who ended up being closer with Morita in real life.

“The first thing I said to him was, ‘I loved you in Happy Days.’” he says. “And walking with him in the back lot of Columbia and I told him this is my first film and if there is anything you see that I could do different or better, ya know, I look up to you and I trust your advice. And he instantly embraced me and I called him Uncle Pat and he called me BZ and along the way, sure enough, he gave me little pointers here and there, very gently, and we became really good friends, actually. Pat and I, over the years, we talked every Christmas and Thanksgiving until he passed away.”

Now with Cobra Kai, new relationships are being built. Mouser, who plays Macchio’s teen daughter Samantha, has become almost like a real-life daughter to him.

“He knew that I had the role and he was like, alright I am your dad,” she says. “He was like, ‘If you need anything call your TV dad.’ So I ended up needing something, and he lives in the same apartment building as me, and I ended up having two roaches on the floor of my apartment. And I had a complete breakdown. I cannot handle bugs, and I am living on my own for the first time and I was like freaking out. And I was like, ‘What do I do?’ Then I was like, ‘I know. I’m going to call Ralph.’ So I texted him. And he texted back, ‘On my way.’ And he showed up a second later at my door with a broom and he was like, ‘Stand aside.’ And he killed the bugs for me and I was like, this is true bonding right here..”

The Karate Kid bond is real. And now a new audience can sit back and pop open an episode of Cobra Kai and feel it as well. “[Karate Kid] has stood the test of time and become a piece of pop culture in people’s childhoods,” Macchio says. “And it’s become way bigger than I have. It’s the fans’ movie and franchise, for that matter.”