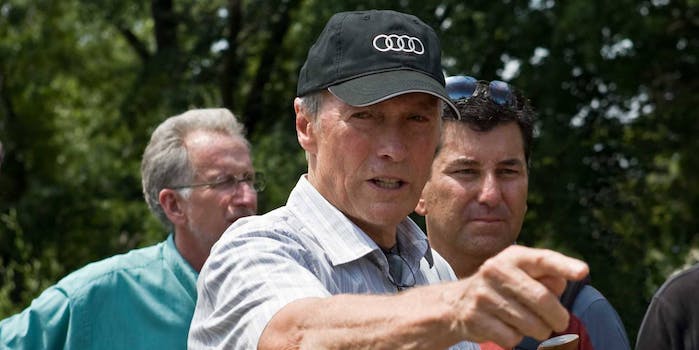 He believes that ‘we’re really in a p***y generation.’

In an interview with Esquire alongside his son Scott, Eastwood discussed Trump, who came up after Michael Hainey mentioned some of the political “touchstones” Eastwood’s characters have influenced over the years, including President Ronald Reagan. And while Eastwood didn’t endorse Trump—even noting that he didn’t agree with some of the things Trump said—he thinks that Trump is tapping into something and that we’re tired of being politically correct.

“But he’s onto something, because secretly everybody’s getting tired of political correctness, kissing up,” he said. “That’s the kiss-ass generation we’re in right now. We’re really in a pussy generation. Everybody’s walking on eggshells. We see people accusing people of being racist and all kinds of stuff. When I grew up, those things weren’t called racist.”

The “pussy generation,” according to Eastwood, is the younger generation who make it a point to try and not offend anyone. And for him, Trump is just saying what’s on his mind, even if some of those things aren’t great. He understands where Trump’s coming from. But he’ll acknowledge that Trump’s said some dumb stuff, like his comments regarding Judge Gonzalo Curiel.

“[Trump’s] said a lot of dumb things,” Eastwood explained. “So have all of them. Both sides. But everybody—the press and everybody’s going, ‘Oh, well, that’s racist,’ and they’re making a big hoodoo out of it. Just fucking get over it. It’s a sad time in history.”

For Eastwood, if it came down to choosing between Trump and Hillary Clinton, he’d have to go with Trump.