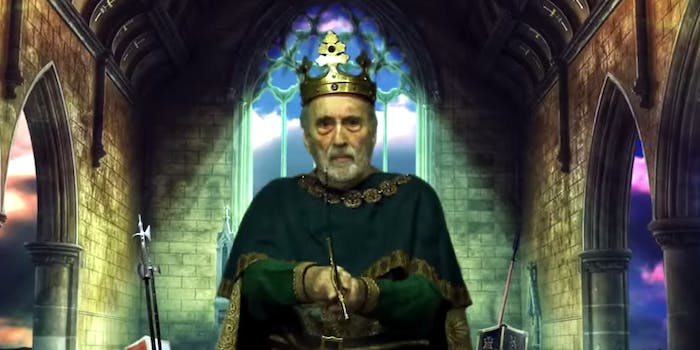 You're never too old to rock.

In celebration of his 92nd birthday, movie legend Christopher Lee is releasing another operatic metal album. Wait, you didn’t know he’d already made one?

Lee, best known is recent years for his role as Saruman in The Lord of the Rings, has been recording metal tracks since 2006. His first album, Charlemagne: By the Sword and the Cross, was just as epic as its title suggests. It tells the story of Medieval king Charlemagne and features a 100-piece orchestra and various guest vocalists performing other roles alongside Lee’s Charlemagne. The sequel, Charlemagne: The Omens of Death, came out in 2013. Christopher Lee is living the dream.

His latest album is Metal Knight, a compilation of heavy metal cover songs. Two tracks come from the 1960s Don Quixote musical Man of La Mancha, with Lee’s reason being, “As far as I am concerned, Don Quixote is the most metal fictional character that I know.” The album is a collaboration with Italian symphonic metal band Rhapsody of Fire.

The first single from the album is a cover of Frank Sinatra’s My Way, which Lee describes as “more operatic” than the original.