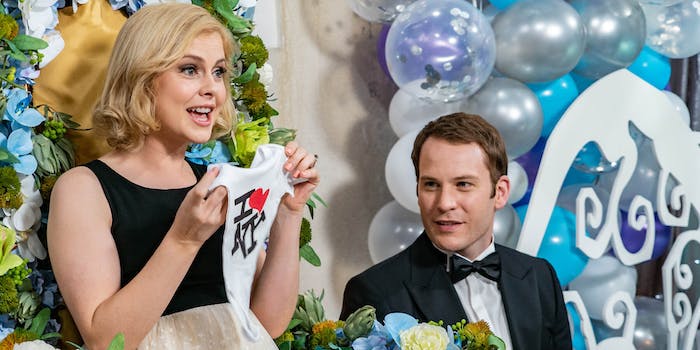 The royal family is expanding, and so is the 'Christmas Prince' franchise.

How much Christmas Prince is too much? As it turns out, fans of combining Christmas movies with America’s longstanding monarchy fetish will take as much Yuletide royalty as Netflix can churn out. Get ready for A Christmas Prince: The Royal Baby, the third installment in the Christmas Prince saga.

Netflix released The Royal Baby trailer on Wednesday. This time, the new King and Queen of Aldovia prepare to welcome a child into this cruel world. Life is probably easier for an Aldovian prince than, say, a child born in a low-lying area ravaged by climate change, but that doesn’t mean they don’t have any problems.  To ensure the baby lives a happy life, the royal couple must rid the kingdom of an ancient curse by uncovering the secrets of a stolen treaty.

Christmas Prince heads will be happy to know that some other old favorites are returning to the fold, including Richard Aston as Mr. Little, Sarah Douglass as Mrs. Averill, Thairah Sharif as Melissa, and Joel McVeagh as Andy. There will also be a bunch of new faces, as viewers will get a look at a neighboring kingdom engaged in a longstanding feud with Aldovia.

Regardless of what’s in store, we can rest assured that there will be just the right amount of sweet, slightly corny Christmas cheer. As the trailer makes clear, “Nobody does Christmas like the Aldovians.”