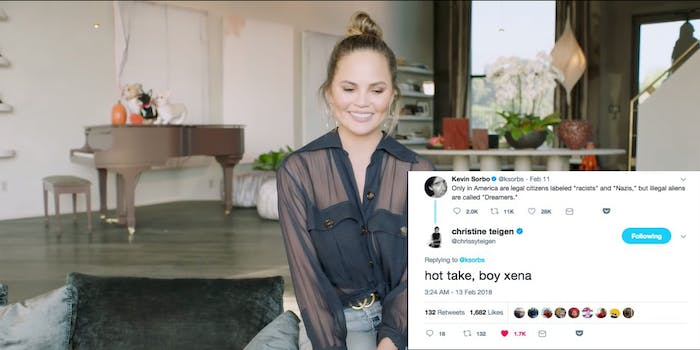 Chrissy Teigen is savage, and the internet’s favorite celebrity proved her prowess once again Tuesday after actor Kevin Sorbo, known for playing the title role in the syndicated TV series Hercules: The Legendary Journeys, came after DACA recipients with multiple racist tweets.

He’s apparently not a fan of immigration and suggested it’s the  “argument of slave owners” that immigration helps fill jobs shunned by most Americans.

“That was the argument of the slave owners 150 years ago”

In another tweet, Sorbo opined that only in America citizens are labeled “racists” and “nazis,” but that “illegal aliens” are called dreamers… though the two have no apparent correlation.

Only in America are legal citizens labeled "racists" and "Nazis," but illegal aliens are called "Dreamers."

Teigen proceeded to dunk on him so hard that she ended him in just four words (and one comma)—“hot take, boy xena.” She’s the hero we never asked for, but no doubt deserve.

And the internet went WILD over this drag.

I didn’t know Kevin was ‘right-wing’… This ruins my childhood.

This isn’t the first time Teigen has come for people espousing racist views. In early 2017, the internet applauded Teigen for trampling white nationalist Richard Spencer on Twitter. He never came up with a rebuttal for Teigen, and so far, neither has Sorbo.

These right-wing Twitter pundits can keep coming up with “hot takes,” but they better be prepared for Teigen’s supreme comebacks.