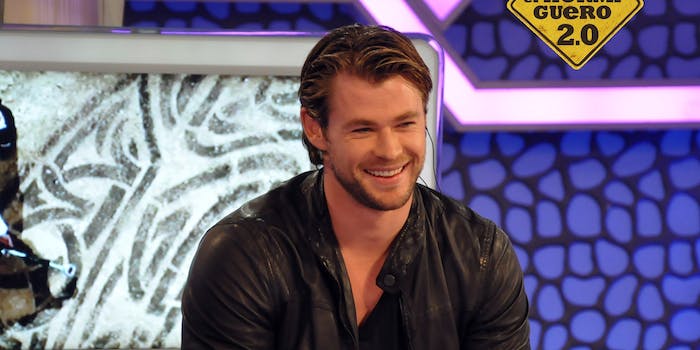 Is Chris Hemsworth’s ‘Ghostbusters’ role bigger than we thought?

One photo that has more questions than answers.

The first look at Chris Hemsworth’s receptionist character in the Ghostbusters reboot has appeared online, and he won’t only just be the person you’re gonna call.

A photo of Hemsworth riding a motorcycle started circulating the Internet Monday, leaving fans to analyze every aspect of what it could mean for his character and the movie as a whole. He’s wearing a Ghostbusters uniform (something original Ghostbusters receptionist Janine Melnitz eventually did outside of the movies), moving what appears to be a supply of materials for the Ghostbusters. He’s also got on a nice pair of glasses—perhaps a nod to Janine?

First look of Chris Hemsworth as Kevin for the upcoming film 'Ghostbusters' pic.twitter.com/aJUxZYQk6Z

Some fans originally saw Hemsworth’s casting as a refreshing instance of him taking a backseat in a female-led film, but then why is he wearing a Ghostbusters uniform?

According to Variety, Hemsworth was actually offered “one of the major roles” early in the production. He initially refused on account of the role in question being too small but later accepted after Sony made the part bigger. Could he possibly be getting in on the action or even assisting his bosses in their ghost-busting?

Just last month, the Wrap reported that Chris Pine was cast as Wonder Woman’s love interest Steve Trevor. But included within the article was the following line: “Steve Trevor will be no mere love interest for [Gal] Gadot’s Diana Prince, as there will be plenty of action to keep him busy, though plot details remain under wraps.” It’s almost as if fans needed reassurance that Pine would be doing something besides being arm candy for Wonder Woman.

Or maybe he designed the uniforms and just wanted one for himself. We really don’t know.

We hope that all of the major characters in Ghostbusters are fully developed characters in their own right, but we also don’t want Hemsworth’s character to take away any of the Ghostbusters’ thunder. At the very least, Feig knows full well what’s at stake.