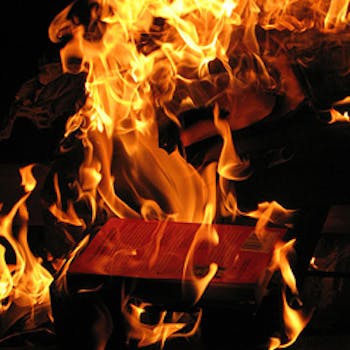 A book review site called ChickLitGirls enraged the online literature community by charging authors $95 for a good review, but the site is just a small part of the online backlash against negative reviewers.

According to opponents of a purported book review site called ChickLitGirls (deleted earlier today, but cached here), positive reviews go for $95 and up. At least, that’s what writer Michelle Gorman learned when she wrote the site to request a review of her book, Misfortune Cookie. Gorman was so taken aback by the response letter she received that she posted it on her blog with the question, “Should Bloggers Charge for Reviews?”

The owners of ChickLitGirls were, in essence, promoting themselves as an amateur marketing firm. After claiming 2.5 million readers per month, they cut to the chase:

Currently, we have so many requests for book reviews and promotion help, that we do have about a 3-4 week wait list. Because we have such a large amount of book review requests, we have had to start charging for them. So now we are now charging a fee of $95.00 per review and subsequent postings. That includes a nice review with the short synopsis that comes with your book, a picture of the book with a link to purchase it from Amazon.

Where this issue gets tricky is in the point the authors of ChickLitGirls made in their response to Gorman. TechCrunch noted their savvy reply that Kirkus, the well-respected reviewing outfit, also charges between $400 and $600 for reviews of “indie” (self- or e-pubbed) books on their website.  And unlike Kirkus, which takes your money for an opportunity to get reviewed, then consoles you with the fact that if said review is negative, it never has to see the light of day, ChickLitGirls made the unwieldy promise to genuinely like everything they read.

A Google cache of the disclosure notice reads, “Even though the owner(s) of this blog receives compensation for our posts or advertisements, we always give our honest opinions, findings, beliefs, or experiences on those topics or products.” The idea of selling guaranteed positive book reviews that many other bloggers might well give them for free obviously left a sting in the mouths of the many people who responded to Gorman’s post.  “How do you hone your craft if always told you’re the best?” Gorman questioned in comments.

Yet ChickLitGirls certainly aren’t the only ones to attempt to structure a blogging site around solely positive reviews. Recently a book blog called Stop the GR Bullies (“GR” stands for popular social book blogging site Goodreads) launched a campaign to call-out and take a stand against what it called negative reviews that have more to do with the author than the book.

The site claims to defend writers like Melissa Douthit who have spoken out about bullying on Goodreads and other community websites in the past, only to find themselves the target of bullying.  Yet many people in the book blogging community feel that the people behind Stop the GR Bullies went too far themselves in bullying the alleged offenders. With a tag for “GR Bullies,” the site proceeded to call out specific reviewers, blasting them for being too negative.  Not only that, but in some cases, they outed the reviewers’ full real names, leading at least one reviewer to write about being stalked and receiving threatening phone calls at her home.

“Something is very wrong with us, and it’s not bad reviews,” stated Dear Author in its writeup of the incident.

But there is a point to be made about negative reviews impacting the new ecology of book blogging, where respected book bloggers frequently make it onto blurbs and jackets. “Is the primary purpose of book blogging to act as ‘cheerleaders’ for authors, or to give good consumer advice to readers?” asked reviewer FozMeadows. Certainly the former view seemed to be the vibe at the latest Book Blogger Con.

The question floating through the minds of ChickLitGirls seems to be that if bloggers can profit in other ways—having their names listed on books, making money from site ads—then why shouldn’t they profit directly from offering positive reviews, since that’s what publishers want?

“The insinuation [ChickLitGirls makes] that any form of negative criticism is malicious with intent to ‘destroy’ authors also denigrates the work bloggers do. The ‘positive review equals big sales’ thing is BS. A bad review can be a big seller. See Smart Bitches’ review of Shayla Black’s Decadent. This site, along with the general attitude towards negative criticism, is really spoiling book blogging & reviews. It’s gotten too personal. People are being hurt.”