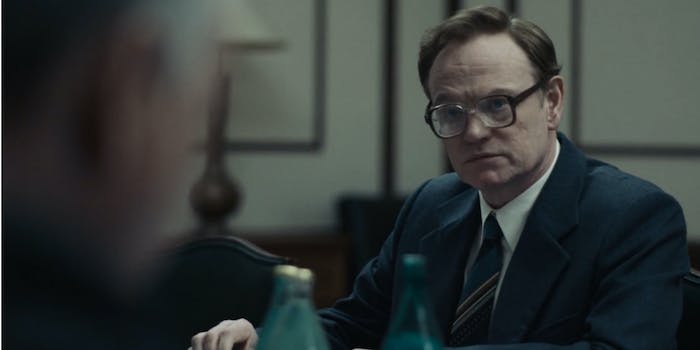 If you do go there, just don't touch anything.

Jared Harris is a bit worried about people taking photos at Chernobyl. He “wouldn’t do it.”

HBO miniseries Chernobyl was nominated for more than a dozen Emmys on Tuesday, and star Harris, who plays chemist Valery Legasov, was nominated for outstanding lead actor in a limited series or movie. In an interview with BuzzFeed, he addressed the nomination and the renewed wave of tourists visiting the site of the 1986 nuclear disaster in Pripyat, Ukraine, saying: “That’s been going on for a while, the adventure tourism. I think what’s happened is sort of the Instagrammers, the so-called influencers, have discovered it.”

The Instagram tag for Pripyat is filled with photos of people posing in front of parts of the site, like the roller coaster and ferris wheel. A debunked tweet about “influencers flocking to the site” led to a debate over whether people should be using the site of an environmental catastrophe—parts of which are still radioactive—to build their brand, though there are plenty of genuinely curious people visiting too, and “dark tourism” isn’t particularly new. Series creator and writer Craig Mazin had previously urged visitors to the Zone of Exclusion to “please remember that a terrible tragedy occurred there. Comport yourselves with respect for all who suffered and sacrificed.”

Harris said he “would just caution them to be careful because they seem to be posing on certain things that are potentially dangerous.” He also pointed out that some posters appear “scantily clad.”

“I mean, you can see them sitting on metal swings and leaning against metal trucks and my understanding is that all that stuff is still irradiated,” he said. “And if it’s metal, it would’ve absorbed through the radiation and held it, so they need to be careful.”

In response to the new wave of attention, Ukraine’s president announced that the site will become an official tourist attraction in an effort to change its “brand.” Perhaps that coincides with the upcoming series a Russian network is making that allegedly blames the CIA for the disaster.