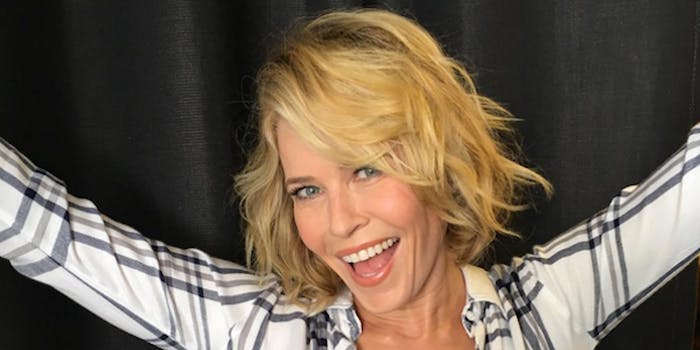 It's gonna be a big change of format.

Chelsea Handler is on a roll.

The comedian and late-night host announced the premiere date and format for her new Netflix series on Wednesday in a hand-written “note to self” that she shared on Twitter.

Here's the announcement for my new show on Netflix. pic.twitter.com/Cqx89RkZNA

Starting May 11, new 30-minute episodes will be available to watch every Wednesday, Thursday, and Friday, and will remain on the streaming service indefinitely.

The show does not currently have a title, and Handler is taking suggestions from fans via Twitter.

From the description Handler provides, the show sounds like a combination of her previous late night talk show (where she interviewed celebrity guests at a desk), and her Netflix docuseries (where she traveled the world trying new things).

One aspect is markedly different: Handler’s nightly E! show usually aired once and then disappeared forever, while a long-term commitment to a streaming service will be a considerable change of format for the comedian.

“Once an episode is up and streaming on Netflix, it will be available until the end of time,” the standup joked in her note. “So put a little more thought into what you say this time around.”