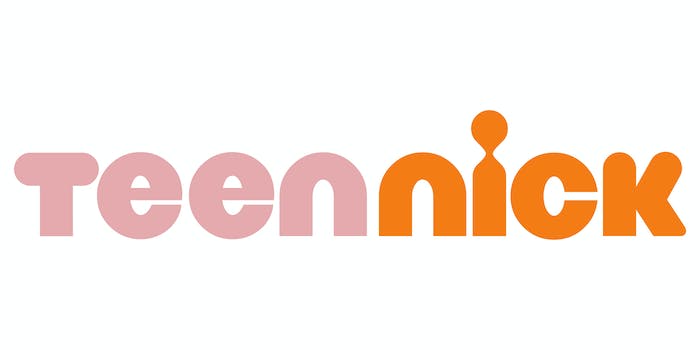 How to stream TeenNick

Where to stream TeenNick

As timeless as Nickelodeon might be, eventually, everyone has to grow up. That’s where TeenNick comes in.

TeenNick is a channel for maturing Nickelodeon fans who are looking for their programming to reflect their budding maturity. This includes the COVID-friendly chat show Group Chat with Annie & Jayden and game show Nickelodeon’s Unfiltered. There’s also the thrilling and hilarious superhero comedy Danger Force. And while the original programming is fantastic, TeenNick is perhaps most well known as a place to watch classic Nickelodeon shows like iCarly, Drake and Josh, Sam and Kat, True Jackson, VP, and the GOAT, All That.

Here’s everything you need to know to watch a TeenNick live stream.

TeenNick has its origins in a few places. In 2001, the TEENick programming block began on Nickelodeon airing Sundays from 6-9 pm, and lasted until 2009. Nickelodeon’s sister channel Nick Jr., previously called Noggin, dedicated its evenings to a programming block aimed at teens called The N. Nick GAS shut down in 2007, and TeenNick took its place.

TeenNick is available on a few of the major live TV streaming services. When trying to decide which one is best for you, you’ll want to weigh the cost, the other channels you’ll receive, and the compatible devices for streaming.

Philo is a budget-minded streaming service, and depending on what channels you want, it might be right for you. The 59 Philo channels lean decidedly toward entertainment; the Philo channel list includes AMC, Discovery, IFC, Lifetime, and the Paramount Network, all for $20 a month. so if you want to stream TeenNick you’re in luck: You can find it on Philo. Philo also comes with free cloud DVR, but shows recorded are deleted after 30 days, so binge responsibly.

If you’re looking for a streamlined, cost-effective streaming package that includes TeenNick, check out Sling TV. It offers two basic cable packages, Sling Orange and Sling Blue, each of which costs $30 per month. There’s also the third option of getting Sling Orange + Blue for just $45 per month. You’ll get more Sling TV channels by choosing Sling Blue, with its 40 channels including sports favorites like FS1 and NBCSN and cable mainstays like Food Network and Discovery Channel. But Sling Orange brings must-haves Disney Channel and ESPN as part of its package. To gain access to TeenNick, you’ll either need Sling Orange, Sling Blue, or Sling Orange + Blue as well as the Kids Extra channel suite. Sling also has a number of add-ons, including robust international packages organized by languages all over the globe.

To watch TeenNick, you’ll want to dock in at the FuboTV Ultra level.

If you’re already looking to AT&T for your wireless needs, you might consider AT&T TV Now to cover streaming TeenNick for you too. AT&T TV Now channels start with Plus and Max, which even include HBO. Then, AT&T plans expand from there, approaching cable selection and pricing with AT&T TV Now’s biggest packages. AT&T streaming also comes with Cloud DVR, letting you record up to 20 hours of TV per month. If you’re looking for TeenNick, get in at the AT&T TV Now Entertainment tier to stream it.