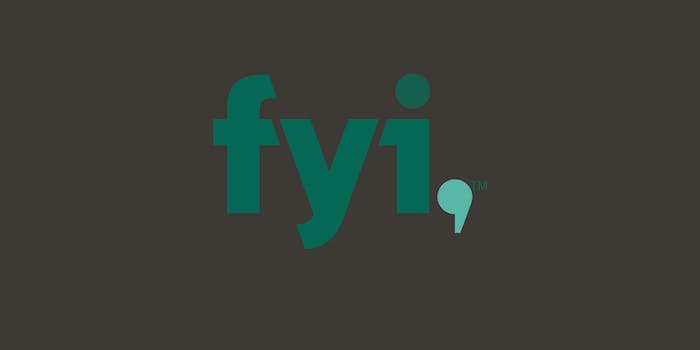 How to stream FYI

Where to Stream FYI

Previously known as the Biography Channel, FYI is a relatively new channel on the cable scene, having relaunched in 2014.

FYI combines the best aspects of lifestyle, reality, and cooking genres into a truly original brand. Original programming includes Epic Meal Empire, produced by YouTube gastronomic sensation Epic Meal Time. Food Factory is basically How It’s Made, focusing on how everything from naan to ice cream sandwiches is mass-produced. Or, if you want to get into the latest real-estate craze, there are three shows devoted to tiny houses. As you can see, the channel is pretty eclectic to say the least.

Here’s everything you need to know to stream FYI.

This channel originally launched in 1999 as the Biography Channel, which would be an offshoot of the popular A&E program Biography. The channel would air biographical shows along with true crime and true crime adjacent programming including Murder, She Wrote and The Adventures of Sherlock Holmes. In 2014, the channel re-launched as FYI, a contemporary lifestyle channel.

How to watch FYI

FYI is available on a few of the major live TV streaming services. When trying to decide which one is best for you, you’ll want to weigh the cost, the other channels you’ll receive, and the compatible devices for streaming.

Philo is the least expensive streaming service to watch FYI. You won’t find the sports channels that dominate other packages or local channels. But it’s a great deal when you want to access 60 entertainment channels for only $20 a month. You’ll get popular channels like Animal Planet, MTV, Discovery, IFC, AMC, Lifetime, Nick Jr, and the Paramount Network, as well as deep cuts like ID and Game Show Network. You also get free cloud DVR, but shows recorded are deleted after 30 days, so binge responsibly.

FuboTV was built from the ground up with sports fans in mind but there are great entertainment options too, including FYI. There are different channel packages available whether you’re looking for basketball, soccer, golf, or even outdoor sports like rock climbing. But no worries, all the great cable channels you’re after are here too, including Viceland, Bravo, TBS, and IFC.

There’s a good chance that you’re already looking to AT&T for your wireless needs. The second you sign up, you’ll gain instant access to 45+ channels, including FYI, local channels, and even free HBO in the Plus and Max channel suites. Plus, it comes with CloudDVR, which lets you record up to 20 hours of TV per month. One account works on two devices, but you can add more devices for only $5.