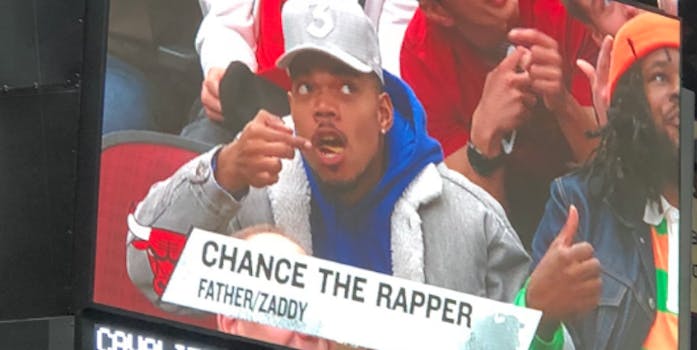 Why the Chicago Bulls called Chance the Rapper ‘zaddy’

Whoever does the jumbotron for the Chicago Bulls definitely reads tweets.

Chance the Rapper was a guest at Monday night’s faceoff against the Cleveland Cavaliers, and on top of the requisite nachos and in-seat dancing you’d expect at any sporting event, he got one big surprise: the team called him “father/zaddy” on the jumbotron.

It’s a reference to a tweet Chance sent on Nov. 14—after attending a Knicks game while in New York to host Saturday Night Live, the Grammy winner was put up on the Madison Square Garden jumbotron with the more redundant title of “rapper.”

At the time, Chance had tweeted jokingly that “in the future, the titles ‘father’ and ‘zaddy'” would also be acceptable:

In the future, the titles “Father” and “Zaddy” are both acceptable.
https://t.co/ofv2BZ9cSy

Fast forward a few weeks and his hometown team has delivered for him with an updated chyron. As you might expect, fans got a kick out of it:

the bulls fixed it. chance the rapper is officially father/zaddy pic.twitter.com/p400aBXc2J

Did they really up @chancetherapper up there as “Zaddy” on th Bulls game? 🤔🤔😭😅 pic.twitter.com/jNZ3ZwDowp