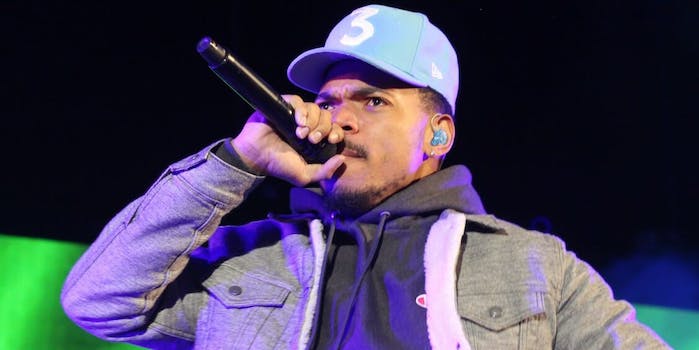 But why did he leave off 'Juice'?

Chance the Rapper on Friday announced he finally released his beloved mixtapes, 10DAY and Acid Rap, all streaming platforms. Previously, they were only available on SoundCloud.

“Proud to announce that #10DAY and #Acidrap will be joining Coloring Book on all streaming platforms this evening accompanied by exclusive vinyl and merch,” he tweeted.

Proud to announce that #10DAY & #Acidrap will be joining Coloring Book on all streaming platforms this evening accompanied by exclusive vinyl and merch and OH YEAH THE PRE-SALE FOR MY NEW ALBUM & TOUR ON https://t.co/hpfCtUy8Hq

Thank you everyone who stayed with me for so long. pic.twitter.com/ZW4COBAB9c

Fans were ecstatic—especially the ones who have been around since before Chance became mainstream with an incredible Coachella performance and the critically acclaimed Coloring Book, which helped him land a Grammy for Best New Artist and Best Rap Album in 2017.

However, some people expressed disappointment that the fan-favorite track “Juice” was left out of the streaming edition of Acid Rap.

“When you realize Chance couldn’t clear ‘Juice’ on Acid Rap 2019,” one user tweeted with a GIF of a very upset Drake.

Acid Rap doesn’t have Juice on it pic.twitter.com/qhsQcoUlM3

I downloaded Acid Rap on Apple Music just to listen to Juice… pic.twitter.com/G1GHXxbuH8

Still, the album has re-entered the top 10 on the U.S. iTunes album charts, so at least some folks were happy with the release.

Chance also announced he is working on a new album, which is slated to be released in July. It will be his first full solo project since Coloring Book dropped in 2016 and is available for pre-sale on his website.