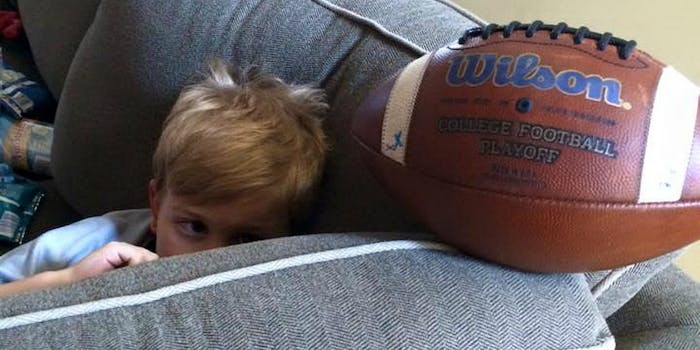 'Words can’t express how happy we are.'

Chad Carr died in 2015 from pediatric brain cancer, but the 5-year-old’s fight against his disease united rivals and inspired the whole sports world.

When photos and videos of Carr—the grandson of former University of Michigan football coach Lloyd Carr and the son of former Wolverines quarterback Jason Carr—were recently stolen from a safe in the family’s house, social media helped get the priceless possessions back to the family.

As the Washington Post reported, the family was away this week on vacation, when two suspected thieves broke into the home and allegedly stole a fireproof safe with two hard drives containing photos and videos of Chad.

“News spread so fast, in fact, that it went viral … and that made a SIGNIFICANT impact on this case,” the family wrote on Facebook. “One of the perpetrators actually saw the information on the news and felt badly [and] after he was apprehended, he actually led the officers to where they would find the hard drives.”

As a thank you to everybody who played a role in the recovery, the Carr family posted a video of Chad playing in the water on the ChadTough Foundation Facebook page.

Chad Swimming in the Lake!

Yes, it’s true … our hard drives have been recovered! Words can’t express how happy we are. These random little memories captured during our five short years with Chad are what we turn to when we need to laugh, cry, or simply spend time with our baby. We are so thankful to have them back. A HUGE thank you to the Pittsfield Township Police Department and the officers who were nothing short of amazing. They worked day and night — a straight 36 hours at one point — following leads and pushing ahead for our family. To show our gratitude, we are donating the $500 reward we posted for the return of the hard drives to a project in Pittsfield Township. We are still figuring out what that project will be, but we want to do something to make day-to-day work a little easier for these officers!Thank you to ALL of our supporters, including friends, family, and the media who jumped on this story so quickly. We truly have the most passionate, caring group of people making a difference in Chad’s name. News spread so fast, in fact, that it went viral … and that made a SIGNIFICANT impact on this case. One of the perpetrators actually saw the information on the news and felt badly … after he was apprehended, he actually led the officers to where they would find the hard drives. Prayers that his heart can be forever changed. Our prayers were answered … A situation that seemed hopeless turned around because of passion and awareness. The parallel to our fight with DIPG is not lost on me and it shouldn’t be lost on you — awareness makes a difference! Let the power of what you did this past week fuel your fire to spread the importance of this cause and these kids!Finally, many of you asked if you could add to our reward fund. Those requests were so humbling to us. We would love for any of you who donated or who were thinking about donating to instead contribute to the Pittsfield Township Police Department. They truly deserve it!We have felt your love and support through this entire process and truly believe all of your prayers contributed to us getting these priceless memories back. Thank you for being ChadTough!

Posted by The ChadTough Foundation on Friday, April 14, 2017