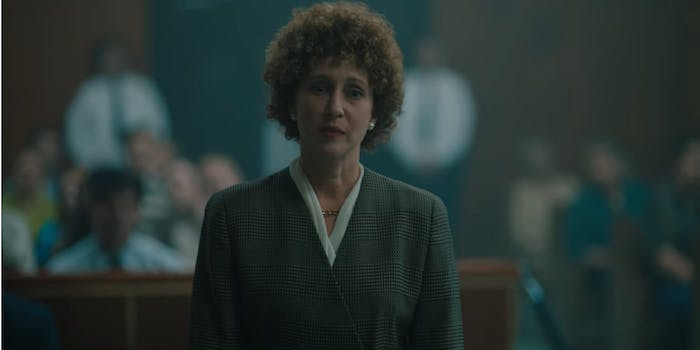 Netflix's 'When They See Us' continues to have real-world effects.

Elizabeth Lederer, one of the prosecutors on the Central Park Five case, has resigned from Columbia Law School.

This comes a week after Linda Fairstein, who oversaw the case, was flamed by the internet for her role in the wrongful convictions of five teenagers and dropped by her publisher, resulting in an op-ed in which she called When They See Us, Ava DuVernay’s limited Netflix series on the Central Park Five, an “outright fabrication.”

Lederer, the former assistant district attorney (played by Vera Farmiga) and lead prosecutor on the case, stepped down from her lecturer position after Columbia’s Black Law Students Association circulated a letter calling for her to be fired and for the school to “explain any actions it has taken to hold Elizabeth Lederer accountable.”

The letter also included this bit of info: “In 2013 a petition was circulated, which gained thousands of signatures and demanded the removal of Lederer. Instead of taking decisive action to address the issue, Columbia Law School simply removed the Central Park jogger case from Lederer’s online bio.”

Also call on the law school to center anti-racism in its curriculum and pedagogy pic.twitter.com/U8By81KWBB

A school spokesperson provided a statement from Lederer: “I’ve enjoyed my years teaching at CLS, and the opportunity it has given me to interact with the many fine students who elected to take my classes. However, given the nature of the recent publicity generated by the Netflix portrayal of the Central Park case, it is best for me not to renew my teaching application.”

The series has had a profound effect on viewers and institutions, and Netflix tweeted on Wednesday that When They See Us “has been the most-watched series on Netflix in the US every day since it premiered on May 31.” However, since Netflix doesn’t release info on viewership, that’s hard to quantify or qualify.

When They See Us has been the most-watched series on Netflix in the US every day since it premiered on May 31 pic.twitter.com/jS8IXIh03g