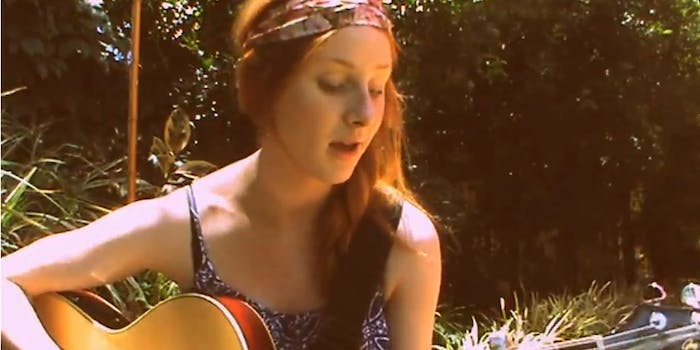 Is Celia Pavey set to become the next Carly Rae Jepsen or Psy? OK, not quite yet—but thanks to a major boost from Reddit, the Australian singer-songwriter might have a shot at YouTube fame.

On Jan. 14, redditor jwestcott posted a video of Pavey singing her original song “Candle in the Night” to the default subreddit r/music.

“This is a girl from the small Australian country town where I grew up. She doesn’t know I posted this, but I think she’s unbelievable. That voice …” she wrote in the link’s title.

Pavey is a native of Forbes, a small town in the state of New South Wales, Australia. Currently, the singer resides in Sydney.

Jwestcott revealed herself to be a fellow musician. “She has asked her friends on Facebook to help her get her music out there anyway we can,” she commented in the thread. “I’m a singer myself, studying opera, so I genuinely appreciate young artists who put themselves out there to be critiqued.”

The post received thousands of upvotes and drew over 1,100 comments from redditors.

While the attention may be new to Pavey herself, she joins a host of other musicians for whom Reddit has served as a catapult to instant recognition. Ted Williams, a homeless man in New York City, shot to fame in January 2012 when a video showcasing his “golden voice” hit the front page of Reddit. That same month, redditors also brought attention to Lucia, a mother of six and aspiring singer. In June 2012, the power of Reddit struck again in San Diego, bringing street performer Charlie Rae the attention of fans and producers alike.

“This is what r/music is really for. Getting good talent out there for everyone to see,” redditor SheesAreForNoobs commented.

“That’s the kind of person you hear just singin’ away in the grocery store … where you suddenly get SUPER interested in green peppers just to hear more of the song. Make-my-day kind of sound,” dirpnirptik added.

The Reddit approach appeared to work in Pavey’s favor. Her video currently has more than 250,000 views and close to 1,000 comments, almost all of which were left within the past 24 hours.

In a later comment, jwestcott updated redditors on Pavey’s appreciation for sharing the link to her video.

“Here’s her response. I think she’s happy :) ‘I had a feeling it may have been you! I can’t thank you enough, you have no idea it means the absolute world to me. Thank you so much for helping me the way you have. You are a wonderful person to do something like this. Thank you thank you thank you,'” she shared.

The Daily Dot reached out to Pavey, too, but hasn’t yet gotten a response.