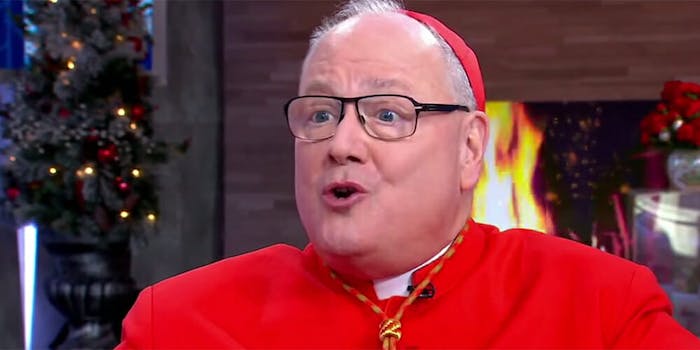 'I didn’t detect anybody out to offend the church.'

Rihanna’s red carpet look was the buzz of the 2018 Met Gala, mostly for its highbrow take on a theme inspired by Catholicism. For some, the papal reference struck the wrong chord, but the archbishop of New York has stepped in to defend the priestess of fashion.

Topped with a miter and intricately beaded, Rihanna’s look was lauded by many as the best celebrity interpretation of the Met Gala theme: “Heavenly Bodies: Fashion and the Catholic Imagination.”

WELCOME TO THE CHURCH OF RIHANNA. COME. SHE SHALL BAPTIZE YOU IN BODY LAVA AND SIN. pic.twitter.com/xIvBunLnhO

But some Christians took offense to the theme—and Rihanna’s getup particularly drew ire.

My religion is not your f*cking #MetGala dress. pic.twitter.com/s8xzpDw7jq

Many, including Business Insider columnist Daniella Greenbaum, said the event was “cultural appropriation” of their religion and compared it to a teenager who was recently criticized for wearing a traditional Chinese dress to her prom.

Opinion: 'Pope Rihanna' and the Met Gala expose the double standard of what people will consider cultural appropriation https://t.co/H14Olid5UR pic.twitter.com/tE7QVMxqZ0

“Social-justice warriors inevitably create distinctions—they have appointed themselves the arbiters of which cultures deserve protecting. And in the meantime, it seems, they’ve left Catholics out to dry,” Greenbaum wrote.

“No one is pretending that Rihanna is the Bishop of Rome,” she added. “And yet absent are the cries that she’s appropriating papal culture.”

But others on Twitter brought up the point that cultural appropriation, by definition, requires an imbalance of power disadvantaging the culture being borrowed from.

To appropriate, a dominant culture takes from a marginalized culture. Not happening here. In fact, Catholics FORCED their religion on Black/brown ppl all over the world – it’s called colonialism.

An unlikely fashion ally, Cardinal Timothy Dolan, who attended the Met Gala, is also defending the event’s theme. Head of New York Catholic Archdiocese, Dolan spoke to SiriusXM’s The Catholic Channel about it, according to BuzzFeed News.

“There were some aspects that looked like kind of a masquerade party, a Halloween party,” Dolan said, adding, “I didn’t really see anything sacrilegious. I may have seen some things in poor taste, but I didn’t detect anybody out to offend the church.”

He even joked that he lent Rihanna her headpiece, a staple of bishop garb.

“She gave it back to me this morning,” he said, laughing. “She was very gracious.”