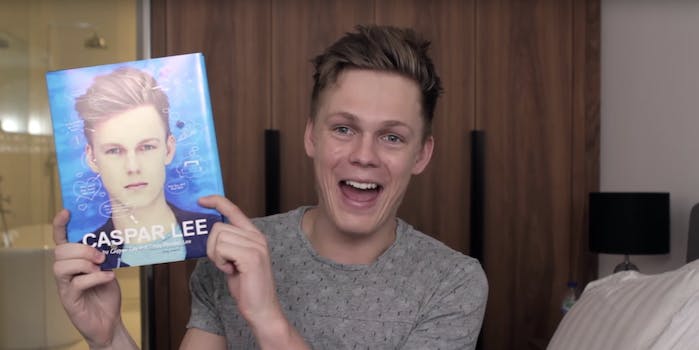 His biographer knows all his inside gossip.

Caspar Lee is jumping on the YouTube publishing bandwagon, but he’s not going at it alone. His upcoming book is penned not just by him, but by a very close source—his mom, Emily Riordan Lee.

Lee announced the project in a skit that had him confronting a YouTuber’s worst fears about publishing. Friends and a ghoulish version of himself jeered at him, telling him to “enjoy the bargain bin” and saying that no one wants to read anything about him. A panicked, fictional Lee tries to bury the books in the yard before anyone can see.

As Lee jokes, he’s far from the first YouTuber to publish a book. He’s not even the first South African YouTuber to do so. However, his book is set apart by letting his mom, who’s become familiar to his YouTube audience as the recipient of pranks on his channel, into the author seat. It’s a premise that often happens in the traditional celebrity world, where Britney Spears or Eminem’s mom will pen a deeper look into their famous child’s life, sometimes authorized and sometimes not.

In Lee’s case, he’ll also contribute to the book in the form of handwritten notes and highlights, making the project more of a collaboration. If it does well, a lot of other YouTube moms might get in on the game of exposing their famous kids’ secrets.