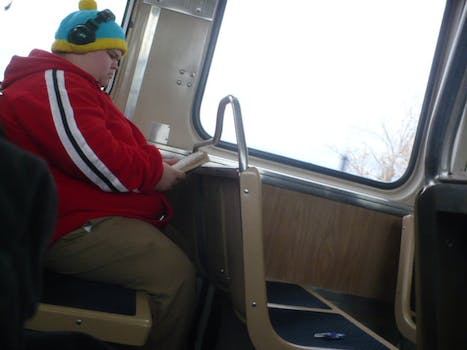 Chris Kutill is quite aware that he looks just like South Park character Cartman.

Earlier today Reddit user AThirdFoot posted a random photo of a guy sitting on Chicago’s green line reading a book and wearing a red shirt and a yellow hat. He titled the post “Cartman” to poke fun at the rider who resembled the portly South Park character that wears an identical outfit.

Little did AThirdFoot know that the subway rider, 21-year-old Chris Kutill, a student at Columbia College Chicago, was in on the joke.

“The whole Cartman thing started a few years ago when I discovered I could do a fairly good mimic of the character’s voice from the show,” Kutill told the Daily Dot. “I then decided to dress up as Cartman for Halloween in 2010.  My mother knits, so she made me the hat and I already had my red coat to complete the outfit.

“I continue to wear the hat to this day because it’s funny to watch other people’s reactions to me when I walk by or get on the train.”

AThirdFoot’s post reached top of the front page where it has collected more than 800 comments from redditors eager to get him to do a AMA (“ask me anything.”). And true to Reddit form, people couldn’t help but turn Kutill into a meme (riding the train through South Park, holding a sandwich, snacking on some cheesy poofs).

Kutill takes none of the jokes seriously and is instead happy to see it brigthen people’s day.

“All in all this has been a funny experience for me,” he said. “I never thought that a picture of me would become so popular.”

Photo posted by a AThirdFoot