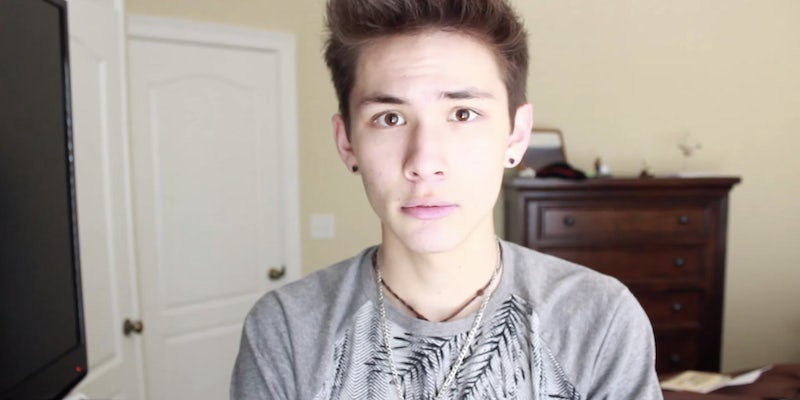 As the fallout from the leaked video continues, Reynolds took to Twitter to threaten suicide.

This article contains discussions of suicide that may be triggering to some readers.

After an X-rated video surfaced of 19-year-old Carter Reynolds purportedly sexually pressuring a now ex-girlfriend, the Vine star took to a livestream service to lash out at a fellow Vine user and threatened suicide to his millions of Internet fans on Twitter.

Late last month a video surfaced that appeared to show him pressuring Instagram star and then-girlfriend Maggie Lindemann into performing oral sex on him. She refuses, and the camera pans to reveal Reynolds’ naked body. He quickly released a statement calling the whole incident a “huge misunderstanding,” and this week he continued to talk about the video and its implications.

Lindemann began posting updates from the hospital on July 19, which some fans assumed had something to do with Reynolds, who had been holding court on livestreaming platform YouNow for two days speaking about Lindemann. Reynolds took to Twitter to tell the world he’d been with Lindemann and she was fine. But he then made his first mention of suicide, saying, “i don’t even want to live anymore.” Lindemann swiftly responded that Reynolds was making fun of her for being hospitalized.

fuck this I wanna go home

i should've never said any names or brought others into my drama. that was wrong for me to do. i'm sorry.

i'm NOT going to jail

i didn't mean for any of this to happen

i was just with her. everything is okay.

maggie is saying i'm the reason why she's in the hospital… lol nah you're just crazy and psychotic. fuck you.

i don't even want to live anymore. fuck this.

Reynolds had spent time on YouNow ranting about Lindemann repeatedly, as well as dropping allegations about fellow Vine stars like Hayes Grier having sexual contact with Lindemann. Reynolds deleted the streams, but they have been uploaded to YouTube in part.

The dumbest of the dumb

@carterreynolds correction. You are weak

Reynolds began talking about ending his life on his Twitter feed after Lindemann’s photo post. His tweets stopped at 12:18am ET July 20.

i've reached my breaking point. hope you're all happy.

i never had any thoughts of killing myself until now. & no it's not bc of maggie. it's bc of all the unnecessary hate i get. i'm sick of it.

Lindemann responded that suicide was not something to joke about, and that she’d be taking a break from Twitter.

getting off Twitter for awhile. today made me realize a lot. sorry for any hurt I've but you through.

Reynolds also alleged in his YouNow stream that Lindemann texted him threatening police involvement, although no one has been arrested.

However, police did investigate a previous incident in April 2014, when Reynolds’ 43-year-old half-brother, a teacher, threw an unauthorized pizza party for students to meet Reynolds. Word got out, over 1,000 people tried to attend, and the older Reynolds was put under investigation for insubordination, but later reinstated to his job. Stemming from the same incident, a 14-year-old who attended the event claimed she had sex with the Vine star that day, but charges were never filed.

The Daily Dot has reached out to Reynolds and will update the story with further developments.