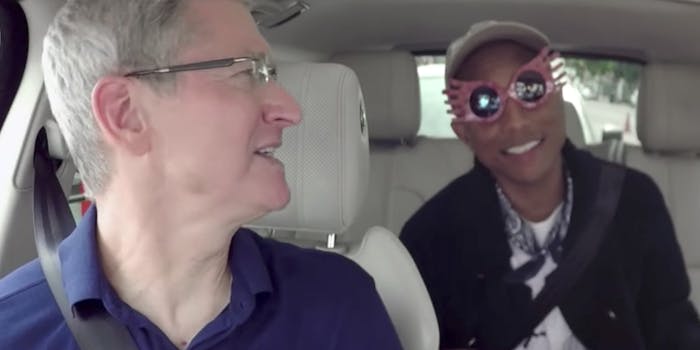 It delayed the series' launch earlier this year.

The launch of Apple‘s James Corden spinoff, Carpool Karaoke, was reportedly delayed earlier this year after Apple CEO Tim Cook asked that certain “dirty jokes” be edited out of the episodes.

According to Bloomberg, Apple had planned to celebrate the release of its first TV show last spring at a Hollywood hotel, when Cook canceled the party just “days before” for unknown reasons. Now it looks like we know why: The show had to be re-cut.

Carpool Karaoke was scheduled to be the first original series to premiere as part of Apple’s $1 billion investment in streaming video, and the unscripted singing series was apparently supposed to be “the opposite of edgy.” References to nudity, profanity, and violence were all apparently no-no’s, which turned out to be bad news for Cook: The celebrity guests Carpool Karaoke relies on are almost guaranteed to be popular for being “edgy” in one way or another—especially on a full episode of television with no script.

The changes ended up delaying the release date, and the company ultimately launched Planet of the Apps, a “Shark Tank-like reality show for app developers,” instead in June. Carpool Karaoke premiered in August.