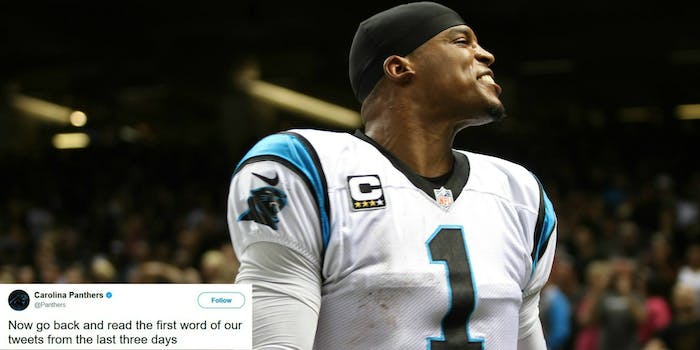 This is just disappointing.

For the past three days, the Carolina Panthers social media team has been working on something big, something that would knock you over like an NFL linebacker ruthlessly sacking an opposing quarterback.

And when the Panthers Twitter account unveiled its offseason product, it probably felt like you were being adopted by the rich aunt and uncle you never knew you had.

Here’s what the team tweeted, seemingly out of the blue, on Friday.

The trick is here to read the tweets from top to bottom (the most recent to the least recent) instead of from the bottom to the top. Here’s how it starts.

Is it football season yet? pic.twitter.com/Us94wxJKo1

About to make it four. #KeepPounding https://t.co/XimY4w7TsK

How does the #Panthers O-Line look heading into training camp?

"My prime better be now"

Got a photo that shows off your #Panthers pride? Share it for a chance to win a VIP trip to training camp!

Flipped into the end zone! This play never gets old. #FlashbackFriday pic.twitter.com/YKFPps422r

Down to 65 Days Until Kickoff! #KeepPounding pic.twitter.com/Xxh39R1zwS

Do you get it yet? Yes, that’s the first line of lyrics to the theme song from The Fresh Prince of Bel Air, and the team didn’t stop there. It kept going all the way through the first verse.

As for how the team handled the final two words of the song, “Bel Air,” a phrase that could have raised suspicion…

That whole thread of tweets is a clever little trick, particularly since the social media team had to lay it all out backward over the span of three days. And people loved it.

Well done and totally original? Well, the latter might not be completely true.

I guess it was only a matter of time https://t.co/lk1YFr6N9E

Somebody OUGHTA GO BACK AND READ THE FIRST WORD OF MY TWEETS FOR THE LAST WEEK.

Instead of laying out the lyrics of a comedy starring Will Smith, though, Richard Cook revealed (the day before Carolina began its project) that he had tweeted the lyrics of Smash Mouth’s “All Star” to achieve top meme-ability.

Yeah, we also saw this. https://t.co/vCaNGdwqsl

Eventually, the Panthers wised up and gave credit for the idea where it was due.

Thanks for being an amazing inspiration @cookywook. We have an awesome care package ready to send your way. https://t.co/0pJmRL1sIB

And that seemed to satisfy Cook.

It’s nice to see the two Twitter accounts metaphorically shake hands and part as friends. But there’s a lesson in here for the Panthers. The best ideas aren’t always so great if you’re caught by Twitter taking them from somebody else.