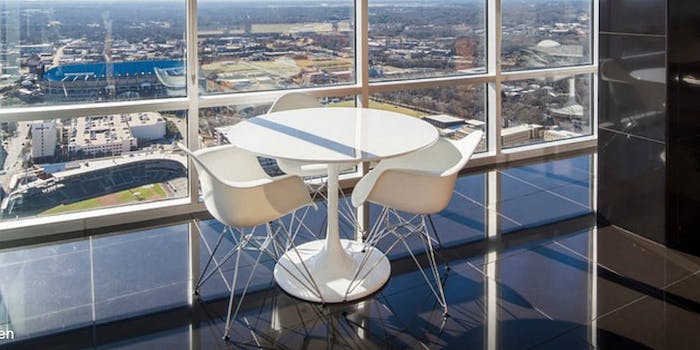 The players who win Super Bowl 50 on Sunday will enjoy receiving an extra $102,000 paycheck for their victory, while those on the losing team will have to make do with only an additional $51,000 payment for the 60-minute game.

But Panthers safety Roman Harper, who is in the second year of a five-year, $10.6-million contract, is looking to make a little bit of extra change while he’s working in California this weekend. At least, we’re guessing that’s why he offered his house offered his house on Airbnb.

Harper is charging $5,000 per night for his one-bedroom, two-bathroom apartment in uptown Charlotte, which he calls “A Panther’s Dream Den.” As he writes, “Come watch me play in the Super Bowl—from my own couch! I’m Roman Harper of the Carolina Panthers, and while I’m in Santa Clara on February 7, I’d love to invite you and a guest to experience Super Bowl 50 in my house.”

You can watch the Super Bowl on his 70-inch TV after you work out in the 4,000-square-foot health club (with a yoga room!) and sweat on the multi-purpose basketball and tennis court. But Harper is asking for his guests not to practice football in the hallways and not to wear their cleats on his hardwood.

Oh, and apparently, he’s got the same house rules as your parents.

Harper says he’ll donate all proceeds—which Airbnb will match—to his Hope 41 Foundation, which, in his words, “helps enable us to prepare today’s youth for tomorrow’s challenges.” Oh, and he’ll also throw in a signed football as a housewarming gift.

But Harper probably won’t let his guests hang out with any of his new friends from California.

Nothing but a G thing baby!!! #sb50 #KeepPounding pic.twitter.com/a4LVqwb7dL