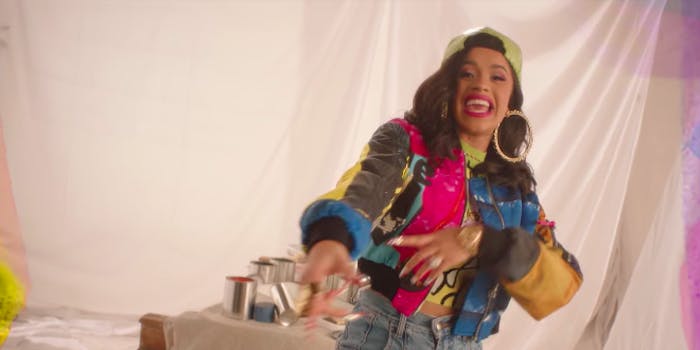 She didn't snatch any awards this year, but Cardi B still dominated the Grammys stage.

Notoriously electrifying performer Bruno Mars found his perfect counterpart in Cardi B during a thrilling rendition of the duo’s new single, “Finesse,” at the 2018 Grammys on Sunday.

Cards opened the In Living Color-themed performance dressed head-to-toe in eye-popping ‘90s threads. The chart-topping rapper strutted to the front of the stage and roused some of the audience members in the front rows from their seats before the camera cut to Mars, who sang the song’s buttery chorus and led a troupe of backup dancers through a bouncy choreographed number. Cardi returned to the stage near the end of the number, going toe-to-toe with Mars and spitting more bars as he lent his sky-high vocal runs to the song.

“Finesse” marked Cardi’s first performance at the Grammys, and it came on the heels of a stunning year for the emerging rapper. She dethroned Taylor Swift from atop the Billboard Hot 100 with her explosive single, “Bodak Yellow,” and appeared on three other Top 10 singles: Migos’ “MotorSport,” G-Eazy’s “No Limit,” and now, “Finesse.” Cardi earned two Grammy nominations this year for best rap performance and best rap song, and though she may have lost them to Kendrick Lamar, it’s obvious her commercial reign has only just begun.