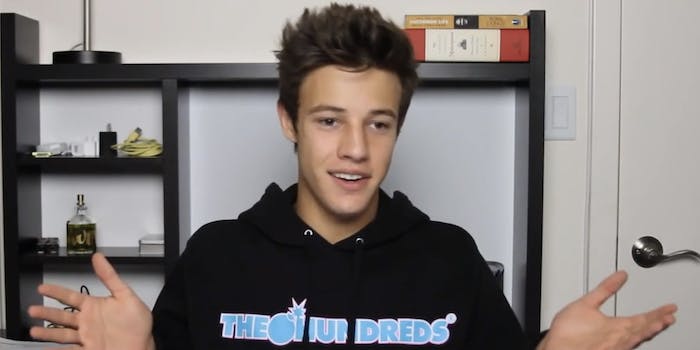 The concept of winning a date with a teen heartthrob is a staple of teen mags everywhere, but Vine star Cameron Dallas took the idea a step further, offering himself directly to his millions of followers.

Dallas rose to fame on Vine, where he’s amassed over 4 million followers and ranks in the top 10 of users on the service. His success has gone multiplatform, and he recently signed with the AwesomenessTV network and secured a movie deal with fellow Vine heartthrob Nash Grier (who earlier this month found himself under fire for homophobic comments on his channel). Dallas was in the midst of his weekly #CallWithCam day, where he telephones or FaceTimes fans who tweet his hashtag, when he started musing about his love life, or lack thereof, and how he’d rather just go on dates with his fanbase.

& we can do fun stuff like jet skiing, go karting, make a big slip n slide at a park, parasailing, rock climbing, stuff like that😳 thoughts?

Dallas then spitballed on Twitter that he’d put more thought into the idea, but ideally he’d pick a handful of fans a month and fly out to spend time with them. He’s even said The subsequent hashtag #DateWithCam has predictably blown up, trending globally as fans vie for Dallas’s attention in hopes of being the person he picks for the experiment.

Just imagine going on a #DateWithCam, doing fun things, being yourself and just talking with your sunshine, man that would be amazing. ❤️

He’s even responded to a few lucky fans already who have concerns over living too far away or being underage, naturally.

“@lukecantbetamed: @camerondallas you’ll be the first guy to take me on a date 😳” *luckiest guy 😘

“@espinobosta: @camerondallas SO FLY TO BRAZIL I KNOW YOU WOULDN’T DO THAT JUST TO SEE ME” I really would…. 😊 #DateWithCam

“@oxdallas: @camerondallas do we have to be a certain age?” If you’re underage you’re parents can come ☺️ it’s just a day to hangout 😊

It’s unclear how serious Dallas is about the seemingly off-the-cuff idea, and only time will tell if he actually makes good on his word, but at the very least it’s a pretty ingenious way to spend the money those fans help him rake in, while at the same time developing more content for his Vines and more loyalty among his followers.