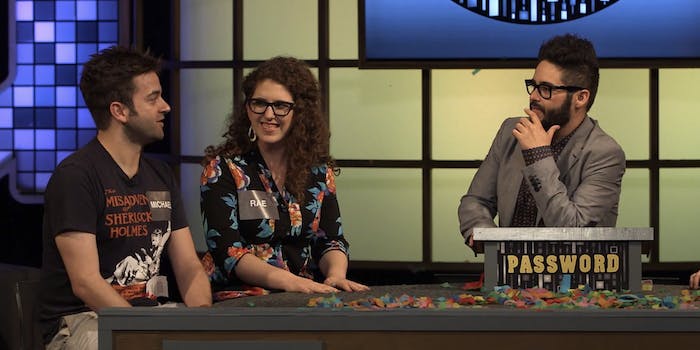 The YouTube game show is harder than it looks.

YouTube’s premiere game show channel, Buzzr, is back with all new shows and a new season of crowd-favorite Password kicking off this holiday weekend.

The Steve Zaragoza-hosted series is back with a whole new set of YouTube celebrities trying to win the grand championship. Only time will tell if someone makes as grand a blooper as the Desert/Dessert drama of last season.

In celebration of the new season, Buzzr gave several journalists, including this one, a chance to try out their Password skills on the live set. When you’re watching comfortable from the audience you can’t understand how the contestants aren’t getting all the clues, but once its you under the harsh stage lights, it’s much more difficult.

Still, we gave it a valiant effort, even if our clue card was highly sexual in theme.

Buzzr also launched a new series, Celebrity Name Game, which kicks off with challenges centered on “Famous Doctors” and “Famous Villains.” This ups their game shows to five total, with Body Language, Family Feud and Beat the Clock rounding out the collection.