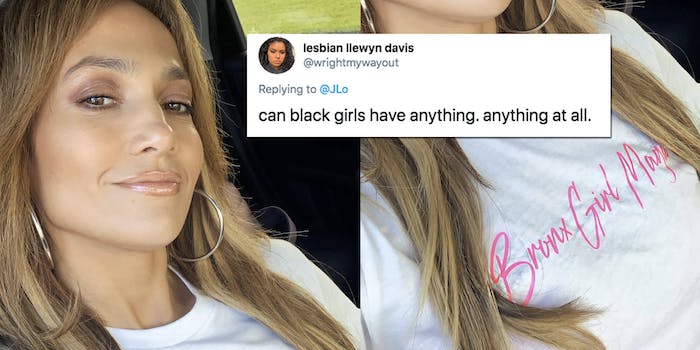 Accusations of appropriating black culture have been pointed at the singer.

The “Waiting For Tonight” singer shared the photos of herself on multiple social media platforms, adding the hashtag #BronxGirlMagic to the Twitter post.

It caught the attention of people who accused Lopez of appropriating black culture by riffing off a popular hashtag used expressly to celebrate blackness.

#BlackGirlMagic has often been used to celebrate the “beauty, power and resilience of black women” since it was first started by CaShawn Thompson back in 2013, according to HuffPost. It’s not a niche thing–if you spend a fair amount of time on the internet, you’ve probably seen it.

A lot of folks are not pleased that something that was intended so specifically for black culture is possibly being repurposed for other communities.

“can black girls have anything. anything at all,” @wrightmywayout tweeted.

Always stealing from black girls. Nothing new. Nothing innovative.

And some immediately drew a connection between J.Lo and Gina Rodriguez, who has been called out for being anti-black on several different occasions.

“Gina Rodriguez is that you?” Twitter user @KikiWithJanine asked.

Now you know J Lo was Gina Rodriguez waaaayyy before Gina even knew niggas gave her the heebie jeebies!

And it had an added layer of frustration for some, knowing that Lopez is about to perform at the Super Bowl’s halftime show alongside Shakira, and this is how she chooses to use that platform.

But some Twitter users did jump to J.Lo’s defense, pointing out that the singer didn’t originate the Bronx-ified version of the phrase.

“First of all #bronxgirlmagic was a thing WAY before J.Lo posted this pic,” wrote @joshb3600. “I won’t tell y’all how to feel about this but y’all love to stay mad for unnecessary shit sometimes.”

Dominique. The time being spent correcting people for trying to rewrite and erase something made specifically for us and by us is time WELL spent. One of the issues plaguing the black community is the constant disrespect of the black woman and it’s being put to an end.

Lopez has yet to comment on the controversy, but if her response to accusations of anti-blackness might bear any similarities to those of Rodriguez–maybe it’s best she leave it at #BronxGirlSilence instead.