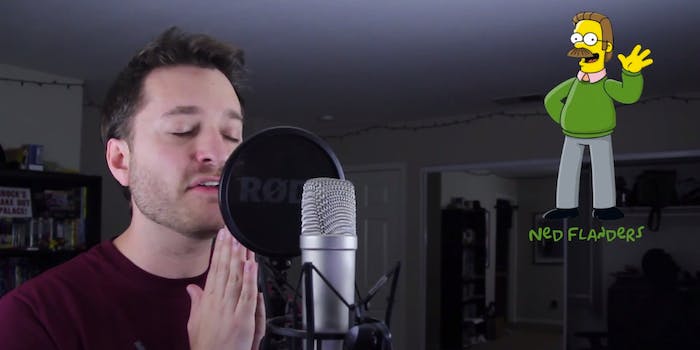 This guy could end up taking over for Shearer.

Harry Shearer’s exit from The Simpsons last week left the show with more than a dozen characters needing a new voice, unless a last-minute agreement can be worked out between Shearer and the producers. In the meantime, hopeful voice actors all over the country are flexing their vocal cords.

Brock Baker, a Los Angeles-based voice actor, has emerged as a strong candidate for the role of Shearer’s replacement. It’s not because he’s formally auditioned, but rather because his latest video shows him doing impressions of 14 of Shearer’s most famous characters. In a world where anything can go viral at any moment, this is basically an audition waiting to reach the right producer’s ears.

Baker’s impressions range from Ned Flanders and Mr. Burns to Otto and President George H.W. Bush, and while some are more spot-on than others, it’s still worlds better than the alternative proposed on The Simpsons more than 15 years ago.