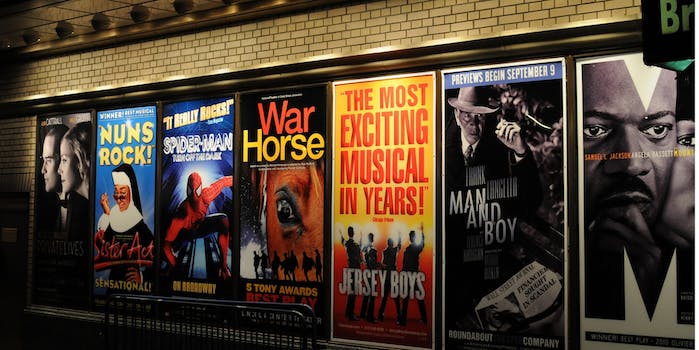 If you’re a theater fan who grew up outside of New York, chances are that at some point a Broadway show came along—like the current run of Hamilton, for example—that made you long to be in the city where the action was. After all, no one wants to wait years after a show’s premiere on Broadway for a touring run that might not even swing by your neighborhood.

Thankfully, at long last, someone got the bright idea to use the Internet to solve this problem. Broadway HD is a new streaming service from a couple of acclaimed Broadway producers. Its goal: to bring the Great White Way to the great wide Web.

The service, created by Tony-winning producers Stewart Lane and Bonnie Comley is offering a full library of theatrical performances available for individual rental—two nights for $8—and monthly and yearly subscription access. The collection is built on Direct from Broadway, a program that’s been streaming theatrical performances in cinemas since 2013. Older stage productions previously shown on the BBC, including a considerable Shakespeare collection, are also on the menu.

Though users aren’t able to see video previews, the lure of recorded live theater is one die-hard fans may be unable to resist. Speaking to the Daily Dot by email, Broadway producer Robert Strickstein was cautiously optimistic about the service, noting that “Any effort to expand the audience for live theatricals should be applauded” and that “existing live theatre fans” are “a market that is currently underserved.”

Strickstein also observed that the subscription service, priced at $14.99/month or $169.99/year, isn’t exactly a substitute for the current season of shows. “Broadway HD appears to be a ways away, however, from offering live streaming of Broadway shows that are currently ‘on the boards,'” he wrote.

Their catalog seems to be comprised of historical telecasts and films culled from the collections of the BBC and WNET, NYC as well as a small smattering of recent (but not current) Broadway musicals and concerts. I suppose the nut of the matter is whether or not they will eventually be able to offer current Broadway shows to their subscribers. The obstacles are formidable — from competing producers on Broadway who cherish their independence, fear of cannabilzing a show’s ticket buying audience, restrictive theatrical performance union agreements, etc.

Strickstein pointed out that the theater community has had recorded live performances in cinemas for years, such as the current seasons offered by London’s National Theatre and the Direct from Broadway program. Additionally, streaming services targeted to theater fans have been on offer for a while, like Stage 17, which boasts interviews, news, and original webseries focused on the theater community. Sure, it’s not the same as going to Lincoln Center, but it’s a slice of life.

But as the viral buzz for shows like Hamilton, whose recently released soundtrack has topped pop charts for a month, indicates, fans want the real thing.

“I envision that BroadwayHD could become a powerful repository of theatrical performance for theatre fans,” Strickstein said, “but whether or not it will be able to gain a foothold as a purveyor of what’s happening ‘now’ on Broadway remains to be seen.”

The point about currency is a salient one, as is the industry’s wariness to give away too much access to its bread and butter: a high-priced ticket to a Broadway musical. Right now there are only five musicals available for streaming. Two of these are from 1980 and 1981. The most recent, the revue Memphis, hails from 2010. Then again, one of them is the hard-to-find live recording of Stephen Sondheim‘s 1998 revue Putting It Together. That alone may be worth the price for many fans.

All in all, the kind of niche appeal and back-catalog that Broadway HD boasts for the moment is a good way to get a certain tier of theater lovers on board.

In other words, it may not be enough to put a new generation of fans on Broadway’s digital front row—but it’s a start.

Photo via broadwaytour/Flickr (CC BY SA 2.0)