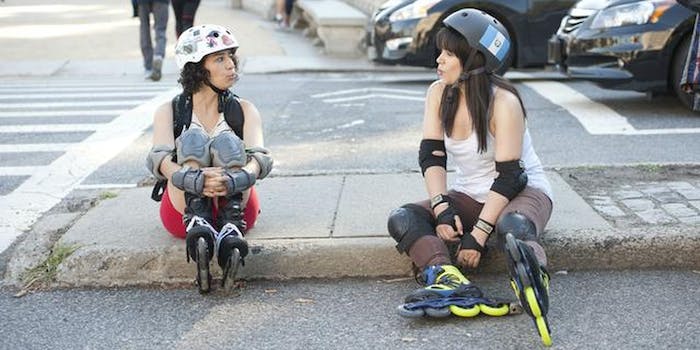 Getting lucky with the ladies of ‘Broad City’

Attention, Drake: The ladies of 'Broad City' want you to guest star.

My best friend recently attempted to get a boyfriend to watch Broad City. Halfway through season 1, he turned to her:

“Is that really how women talk to each other?”

The friendship between Abbi Abrams (Abbi Jacobson) and Ilana Wexler (Ilana Glazer) is the heart of Broad City. They have brief romances and shitty jobs. They get high and get in low-pressure situations that comically snowball. But the focus always comes back to their love for each other—and for New York City, which serves as the show’s maze. In so many programs, friendships are used to drive plots, but in Broad City, the story is Abbi and Ilana.

At the end of season 1’s final episode, the two walk home in the early morning hours, after Abbi saved Ilana from an allergic reaction. They talk about their “gross sex” lists, but there’s something about their ease together as they fade out of view that is true and real. At the end of season 2’s second episode, the two talk about childbirth—specifically, Ilana’s fear about pooping while giving birth.

“I’m going to see you give birth, then?” Abbi asks.

“Bitch, durrr,” Ilana responds. “Who else would be my focal point?”

Broad City is about two women who were lucky enough to find each other—through UCB Theatre, in this case—but it’s also about the way they communicate. In the show, their computers connect them; some of the best scenes are of webcam conversations between the two. In the Broad City webseries, which debuted in 2009, they also communicate via webcam. Glazer says they pitched the show as something more webcam-heavy than it is now. (In tonight’s episode, the ladies try to unplug from the Internet, which leads them both to put on rollerblades and get “in touch” with nature.)

In those early webseries episodes, we see Abbi and Ilana still as tuned into each other as they are now, though their city-wide escapades were a little more low-key. The show could have hit two seasons and then quietly slept on YouTube for the next decade, a digital vigil we checked in on every few years.

Something magical happened with Broad City, though. It existed in that sweet spot when the webseries format was still experimental and Netflix and Amazon hadn’t yet forced the medium to grow a few notches. It wasn’t a major hit at that time, but it found the eyes of Amy Poehler, the Oprah of comedy, and later Brooke Posch at Comedy Central, who was also responsible for developing Inside Amy Schumer.

The webseries always felt like it was made to transition to TV. And now that it has, we have scenes in which Abbi finds out her annoying roommate Bevers is gone and runs around her apartment naked singing along to Lady Gaga’s “Edge of Glory.”

“That’s my guilty pleasure song,” Jacobson told the Daily Dot. “I think I already knew all the words.”

The second season has also seen Abbi penetrate a man with a strap-on. Were risks more important in season 2?

“Risk-taking isn’t really on our radar when we’re creating,” Glazer said. “We just wanted to make the show something we’d want to watch and laugh out loud at. It feels like, from the response, that we’ve done risky stuff, but we never say, ‘How risky can we make this?’”

“In the season second, while risks aren’t on our mind, we do have a little bit more freedom to explore,” Jacobson said. “People know the characters a little bit better, and people know this world a little bit better. But as Ilana said, it’s about what’s the funniest thing. I think that’s the natural progression for any show in its second season.” (When asked about dream guest stars for the show, Glazer says Drake is someone they’ve brought up. Drizzy, if you’re reading this, let’s make it happen.)

True to real friendships, Ilana is also finding out more things about Abbi she didn’t know this season, which provides some of the best plot twists. Last week, there was Abbi’s blackout-drunk alter ego, Val, which Jacobson says was an actual college character she would inhabit while sauced. Even the Lady Gaga scene, Glazer says, was something the audience saw, not Ilana.

“The more we get into this world, certain things come up and we’re like, ‘That should be real. Why can’t we make this world exist online as well?’” Jacobson said. “They’re these little things we hope the viewers stumble upon.”

“I think we’re trying to make the world of Broad City the real world,” Glazer said. “Website by website, we’ll get there.”

We should be so lucky.