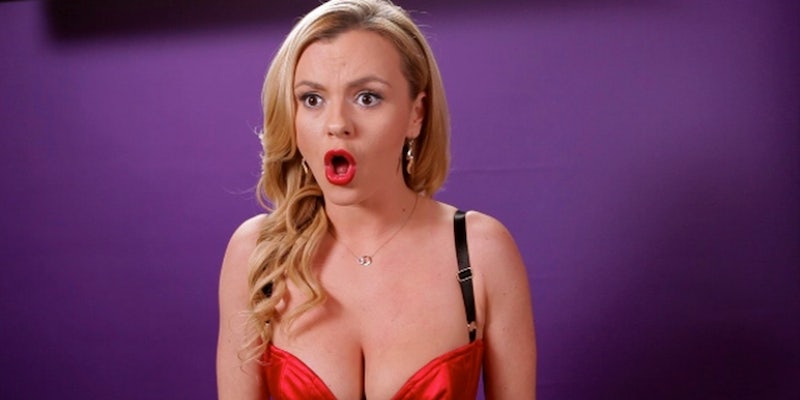 A former adult star is transitioning into comedy

Bree Does Comedy is a collaboration between Kimberly McVicar, star of Funny or Die‘s Kim Kardashian Show, and adult star Bree Olson, who has appeared in more than 250 films and was one of Charlie Sheen’s “goddesses,” once upon a time. A Kickstarter for the project was launched in early February to fund season 1. As of this writing, it’s halfway there.

McVicar has background with improv groups like UCB, Second City, and the Groundlings, and explains she and Olson met through the L.A. comedy scene. The first time she saw her perform, Olson was playing the Virgin Mary in a Bethlehem manger scene, but in a low-cut dress. McVicar noticed when the two would be out together, they were treated differently. So she decided to write a show about an adult star who tries to cross over.

“I’ve been out of the adult industry for three years, but there are a lot of people who hold on [to that], and a lot of my following doesn’t understand I’m not in the industry anymore,” she said. Olson adds that her name often hinders her chances of getting a callback, but she says she didn’t anticipate that when she left the business. There are positives and negatives post-porn, and the webseries explores that.

I asked Olson about some of her favorite comedians. “You better say me,” McVicar laughs. She also likes Amy Poehler and Sandra Bullock, and thinks Nathan Fielder is completely underrated.

McVicar already wrote all six episodes, and each tackles chapters in Olson’s journey: the audition, improv, standup, sketch, and the makeover/makeunder. McVicar plays the over-eager manager, and Grace Santos Feeney plays Grace, who’s obsessed with Olson and pops up unexpectedly.

“[Grace] is based on a million people,” Olson said. “But I don’t put a restraining order on Grace like I do [some of] them.”

“I think the scripts are similar,” Olson laughed. “It was interesting because most of my time in adult I spent doing films people fast forward through. I got accustomed to being on set and having heavy dialogue. Obviously there’s a huge difference in quality, but being on set is not that different at all.”

As for the series, if it’s successfully funded, McVicar says it should be out “before your taxes are due.”

Photo via Bree Does Comedy/YouTube