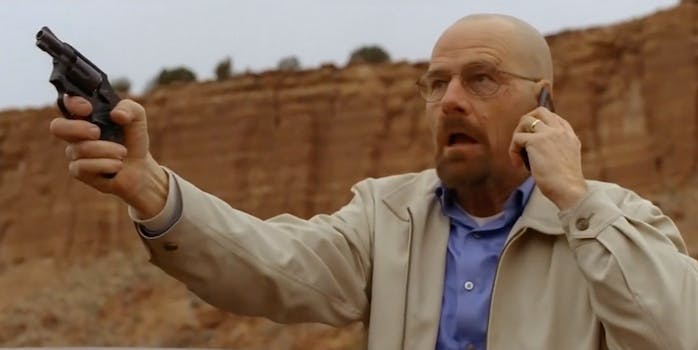 Screengrab via Breaking Bad - The Movie/Vimeo

Here's our verdict on the two-hour fan edit.

Almost four years after the critically acclaimed AMC show about a cancer-stricken chemistry teacher who “breaks bad” and turns to the meth trade left the air, a fan has recut the five-season show into a two-hour movie version available on Vimeo.

Squishing 62 episodes into a two-hour cut is no mean feat, and commenters on Vimeo were right to point out that a lot—specifically of the character arc of Jesse Pinkman—gets cut in this version in favor of a Walt-dominated throughline.

Overall, it does a nice job of weaving a few choice foreshadowing moments and laying some groundwork about the “growth, decay, transformation” that awaits. Crucially, while it takes a different spin on the opening scenes, the show’s explosive finale is (perhaps unavoidably) left largely intact. Plus, there are some nice original touches here, like the opening credits that showcase a bit of each character’s personality as the actor’s name appears atop a well-suited textile swatch.

It’s a very smooth edit, technically speaking, but it’s immediately clear to old fans of the series that something in the overall arc isn’t quite right. Longer snippets of scenes—like the family intervention about chemotherapy—play out more like a best-of montage than a new, tighter storyline. (Personally, I loved the use of “Crapa Pelada” as a meth montage rather than its original appearance in Gail’s apartment, but wouldn’t it have been easier to cut Gail’s arc entirely than to use him for less than 10 minutes?) The accelerated pace is an understandable one, given the time constraints, but it’s hard to ignore what’s missing when you know the source material.

Gaylor Morestin and Lucas Stoll are far from the first ones to tighten up a massive project into a movie form: Someone recut the Hobbit trilogy into a single film after its release, and another fan combined Captain America and Winter Soldier for a complete look at the backstory. Jason Grzybowski even attempted something similar with Breaking Bad a few years back, but his version was pulled from YouTube.

Bottom line: Look, if you or a loved one lived under a rock between 2008 and 2013 and you desperately need to catch up on the show’s high points before you try to hit up the Los Pollos Hermanos pop-up in Austin or watch the new season of Better Call Saul, press play. This is a great homage to an even better show. But if you want to really understand the nuances and heartbreaking cliffhangers of a show widely hailed as one of television’s best in recent memory, nothing will top the five-season run of the original cut.

Update 3:52pm CT: Sony’s issued a Digital Millennium Copyright Act claim to remove this cut from Vimeo for infringing on its copyright. While fan works are typically regarded as a fair use case, and the creators here put disclaimers left and right acknowledging it wasn’t their original footage, it seems this video was destined to be pulled.