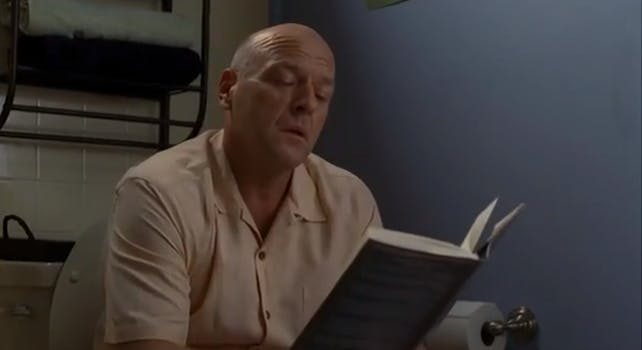 DEA Agent Hank Schrader figures out the major plot twists of famous films while sitting on the toilet.

Over 2.8 million people watched DEA agent Hank Schrader’s literal “oh shit moment” on Breaking Bad this past Sunday, but what if he had a different epiphany on that toilet?

Warning: this video will spoil the latest episode of Breaking Bad if you haven’t yet watched it.

Tumblr site Hank Takes a Shit took that very question and made Hank’s eureka moment into a meme, as he came to other realizations in the bathroom in cleverly cut YouTube videos, which combine the final scene in the Breaking Bad mid-season finale with plot twists from some famous films like The Usual Suspects, Soylent Green and Citizen Kane.

Hank, while sitting on the toilet, picks up a book to read to pass the time. However, before he can actually read the book he notices a handwritten passage that hints to a plot twist. A flashback to scenes from said movie results in the “oh shit” face actor Dean Norris pulls off perfectly—although the parody videos don’t include the sound effects from the original scene.

A plot twist parody list wouldn’t be complete without one of the most iconic twists in recent movie history: The Empire Strikes Back. Star Wars fans might consider Darth Vader’s true identity common knowledge, but somehow Hank has managed to evade that knowledge since the film’s release in 1980.

Hank Takes A Shit started posting videos on Sept. 5 and the five videos only have 433 collective views so far. Fans will have to wait months for the next episode of Breaking Bad, but until then, Hank has many more movie spoilers to keep him busy.