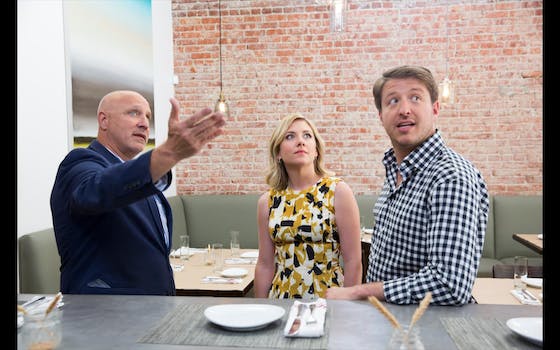 Move over, James Beard. Bravo TV is the new sheriff in flavor town.

Led by chef/restaurateur and the face of TV’s Top Chef, Tom Colicchio, Best New Restaurant is a scrupulous gastronomic treasure hunt set on finding the place that will make every foodie’s mouth water. Alongside Colicchio in his quest to find the crown jewel of American dining will be culinary partner Jeffrey Zurofsky and digital food maven Maggie Nemser.

In a twist to make Best New Restaurant different from its legion of competitors is a digital twist: “Secret Service.” The show starts with 16 hotspots, but after each of the eight semifinal-winning eateries are put through their paces, the show is not over. Armed with hidden cameras, a team of food experts will arrive unannounced at the aspiring contestants and chronicle their service. Colicchio will screen the clips on air after each episode, but the real twist will come when the list of hopefuls is cut in half based on the video clips.

To the producers’ credit, adding Nemser to represent the digital diner makes for a fresh perspective to the voting—and offers a bit of tension when there is no meeting of the minds. This special spark will be one of the ways Best New Restaurant hopes to hook viewers and keep them engaged.

“Tom is a chef and expert and knows restaurants as a business,” Nemser told the Daily Dot. “I come from the diner’s perspective, from the experience side of things. There will absolutely be friction, but in a most wonderful way as we  judge them from the different perspectives.”

Nemser’s Blackboard Eats combines curation with commerce, and this coverage of the food scene has revealed deep knowledge of the food scene and developed credibility among the culinary cognoscenti. The site includes reviews from expert food writers as well as content about food trends and cutting-edge culinary products. At the same time, Nemser’s company offers deals and discounts at many of the top restaurants it features. As Blackboard Eats grows in popularity, so too does Nemser’s cred in the food world. In fact, it is that digital food fame that led to her role in Best New Restaurant.

“It was one part hard work, one part luck,” Nemser said of her association with the new Bravo series. “The producer was a fan, so they decided to bring me along for the ride in this new endeavor.” The newest addition to the Bravo food roster didn’t get to meet Colicchio before the show, but since the start of filming, they have crossed forks on numerous occasions.

Bravo is extending its digital footprint to connect with Best New Restaurant viewers in new ways. In addition to “Secret Service,” it will have “Play Live,” in which viewers can vote (that is, without eating) on the establishments featured on a given week and see their comments shown on-air during the broadcast. The winner will be crowned “Viewer’s Choice” and shared across the network’s social channels.

The challenge for Bravo, despite it being the home of the ever-popular Top Chef, is to separate this series from the countless others boasting food listicles of every dimension such as The Best Thing I Ever Ate, Best Bars in America, Food Paradise, and You Gotta Eat Here. Nemser says Best New Restaurant provides a 360-degree view of what makes a great restaurant, including food, ambiance, service, and intangibles. “We span the gamut,” she added. “We peel back all the layers to find out what truly makes a great restaurant. We look for the drama behind the scenes and how it all comes together for excellence.”