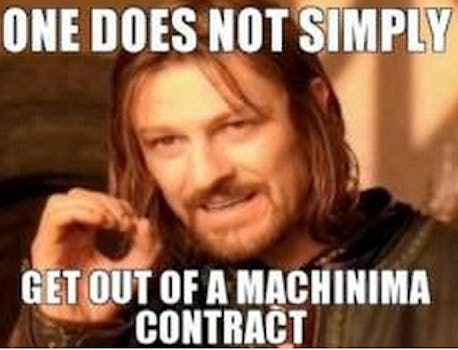 The Internet rallies to support gaming commentator in dispute with Machinima.

YouTubers and Redditors alike are rallying behind a popular video game commentator who’s leaving YouTube because he can’t leave his network.

Support for Braindeadly in his fight with Machinima has now spread all over YouTube, with hundreds of users making videos on the topic in the last 72 hours, including a video from Anonymous, a parody of the whole thing, and a troll attempt. Machinima, meanwhile, has maintained a determined silence.

It all began earlier this week when a very popular newcomer to the video-game commentating scene named Braindeadly uploaded a video explaining why he was quitting YouTube.

Braindeadly said he was leaving the video-sharing site because he wanted to leave Machinima, a video distribution network that provides YouTube video producers with promotions, advertising, and production tools. His contract with Machinima, however, is for life. Announcing his plans to quit late Tuesday, Braindeadly bemoaned his failure to read the fine print, and seemed heartbroken at the decision before him.

His video shot to the front page of social news site Reddit within hours of being posted, and in turn effectively rallied the electronic mob to his cause. To date, Braindeadly’s farewell video has been viewed 668,000 times.

Hordes of outraged users took to downvoting random Machinima videos, which others, in turn, decried as the contract dispute had nothing to do with the downvoted videos. Others took to spreading the message “Free Braindeadly!” or “Braindeadly2012!” in various corners of the Internet, including gaming forums, Twitter, Facebook and YouTube. Some even started harassing Machinima employees on social media.

Athene Wins and TotalBiscuit, two prominent members of the video game community on YouTube, held an impromptu 30-minute public discussion about contracts on May 10 during Athene Win’s livestream.

TotalBiscuit, who said he graduated with a law degree in the UK, said “infinite contracts are probably illegal” and noted he knows a couple of people already who hired lawyers to get out of their Machinima contracts. “If the contract terms were not legit in the first place, then the contract’s null and void,” said TotalBiscuit.

Paintball Kitty, another well-known video-game commentator, fielded questions regarding network contracts, particularly Machinima’s, in her video about the controversy. Titled “The M Word – YouTube Networks / Perpetuity Contracts” Paintball Kitty reminded viewers that contracts are business agreements and everything, including the fine print, needs to be read and understood. She recommended asking the network you are signing up with to clarify any terminology you don’t understand.

Machinima, on the other hand, has yet to officially release a statement on Braindeadly or on the terms of its contracts.

Machinima’s contract disputes with its members are almost old news for the YouTube community.

KSIOlajidebt tried to leave Machinima in March, and another gamer, The Original Jake, ran into the same clauses in his contract a few months back.

“It really feels like Machinima is actively looking for bad press and making bad decisions on purpose,” said William Hyde, a.k.a. TheWillofDC during his YouTube news segment on the controversy.

Hyde went on to call Machinima’s actions a “loud and clear middle finger to many of their talent,” before adding that he personally knows three people “who are in court” right now with Machinima trying to get out of their contracts.

Since Braindeadly’s video shot to the front page of Reddit, he has been in contact with entertainment and video game lawyer David Philip Graham, according to Braindeadly’s Twitter. Graham originally offered Braindeadly his services on Reddit.