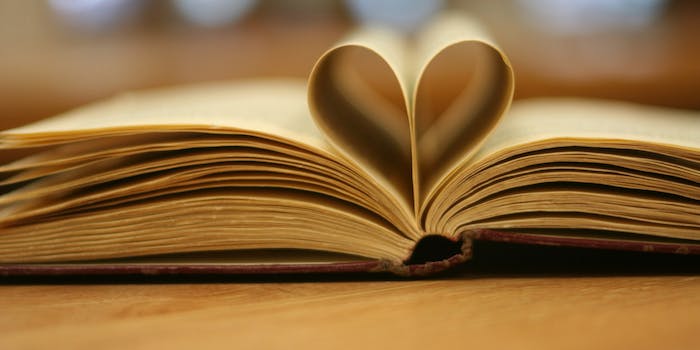 Behind Booklandia.TV's journey to restore urgency to reading.

The University of Oregon’s School of Journalism and Communication, facing a tight turn away from the old style of doing journalism, but facing the continued need for its existence, has turned to Web television to reaffirm the value of the written word and to provide students with a way to do original reporting.

As faculty adviser Ed Madison pointed out in his story for PBS MediaShift, “We noted there are food channels, sports channels, and animal channels. However, we could not identify a book channel of any significance.” So they decided that nothing teaches like doing and had the students start one, Booklandia.TV. It launched on April 6.

Madison, one of the founding producers at CNN and now assistant professor at Oregon, leads the student-run project out of Allen Hall Studios, a journalism incubator at the school’s campus in Eugene, Oregon. Madison told the Daily Dot that the project is structured as a credit course that meets once a week in the AHS.

The staff consists of about 20 students and three faculty per quarter.

Madison cited a Pew report from 2014 that discovered the number of Americans who don’t read tripled since 1978, with nearly 25 percent not having read a single book (print or e-reader) in the previous 12 months.

“Research suggests the reason may be that people who grow up reading are far more likely to go to college,” he wrote. In other words, America’s running a very real risk of getting so stupid it just lurches to a stop and falls over dead. If that happens, journalists are going to have little to do.

Powell’s Bookstore is, by some measures, the largest bookstore in the world. It’s located less than two hours away from the main Oregon campus. So Booklandia.TV struck up a partnership, allowing its reporters and editors access to the full slate of visiting writers—as many as one a day—and cross-branding and promotion.

Among the “shows” that are “broadcast” by the “channel” are man-on-the street interview features What’s On Your Nightstand? and Judge a Book By Its Cover. Kid’s Corner is aimed at younger viewers ranging from toddlers to high school students and features their reflections on their favorite books. There’s a Writers on Writers segment, as well as Book Banter, a “scripted animated segment that pairs historical literary figures engaged in humorous conversations, much like JibJab.”

To secure “real journalism” bona fides, some of the channel’s reporters headed to Cuba over their quarter break and brought back stories on handmade book publishers and analysis stories on the island nation’s high literacy rates. In addition to stories, the trip also rescued the students from passively received images of the country.

“There is a sharp contrast between what we witnessed and major media reporting about Cuba,” Madison explained. “Generally, people there are not depressed and downtrodden. We found Cubans to be hospitable and eager to embrace renewed relations between our countries.”

Not surprisingly given the channel is run largely by young people who grew up with social media, Booklandia.TV incorporates Instagram, Facebook, and Twitter into its marketing plan, along with its distribution via YouTube and Vimeo.

Further, they are actively encouraging the contribution of other universities globally, as well as contributions from younger students—all the way down to kindergartners. At the same time they are making their content available to newspapers, radio, and television stations, and civilians to distribute and even to embed on their websites.

“Our intent is to create short and therefore sharable content,” said Madison. “Studies indicate that strategy is best for the Web.”

Legacy news media has struggled with understanding and employing the new technologies that have shifted the practice of journalism. At the same time, the new media birthed from those technologies has struggled to establish credibility.

The University of Oregon has been a surprising laboratory for exploring some of these changes. Not long ago, the journalism school did not have a single course on how to use the new technologies. The local “alternative newsweekly,” 10 years after the New York Times started its first blog, was still playing wait and see, its editor having told a reporter they weren’t sure yet whether or not blogs were a fad.

That has changed significantly.

“Our students benefit from experiences that allow them to chart the future of media,” said Madison, “rather than passively try to fit into existing paradigms. Technology will continue to change, and our students leave here prepared to be innovators.”

Booklandia.TV is the sort of project that points a feasible path forward, allowing students to understand the technology from the inside as a full set of tools for some basic journalistic activities: observing, discovering, building out, and presenting the events and trends that matter to the people in the community they serve.